U.S. Dollar Will Be Key For Gold Next Week - Analysts

(Kitco News) -Gold traders will need to pay attention to the U.S. dollar next week after it gained momentum and could test near-term resistance.

The U.S. dollar saw a considerable boost Friday as U.S. retail sales were stronger than expected in April, rising 1.3%, beating expectations for a rise of 0.8%. The U.S. dollar index is ending the week at its highest point since late-April, trading just under 95.

An overall stronger U.S. dollar caused gold prices to end the week in negative territory. June Comex gold futures settled Friday at $1,272.70 an ounce, down 1% on the week.

Silver prices saw its second consecutive weekly drop but managed to hold key support over $17 an ounce. July Comex silver futures settled Friday at $17.132 an ounce, down 1.9% on the week.

Analysts are expecting to see an increase in volatility in the U.S. dollar as major U.S. economic reports will be released, including the minutes of the April Federal Open Market Committee meeting and the Consumer Price Index. Most analysts agreed that a stronger inflation reading could be bullish for the U.S. dollar and, in turn, bearish for gold. 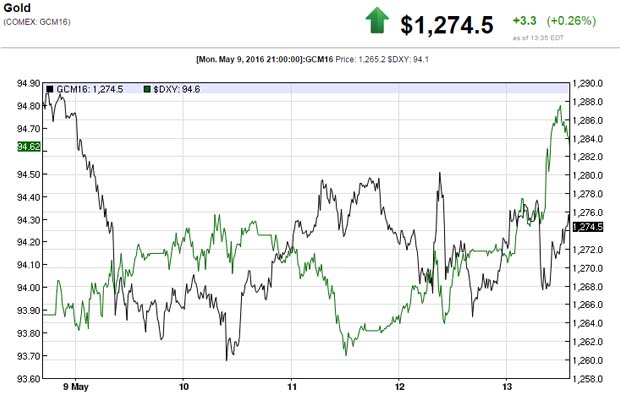 Adam Button, currency analyst at Forexlive.com, said that he could see lower gold prices next week as the U.S. dollar “is poised for another strong week.”

Chris Beauchamp, senior market strategist at IG, agreed that the U.S. dollar will be the important factor for gold in the near-term; however, he added that he could see a reversal of the U.S. dollar’s recent strength.

“If the U.S. dollar takes a breather, which is not unexpected as it has had a seen a pretty good bounce, then I think we could see higher gold prices next week,” he said.

However, Beauchamp added that gold still needs to break $1,300 an ounce to rebuild its momentum. Although he is bullish on gold, he sees prices capped in the near-term around $1,285 an ounce, which could lead to disappointment among investors and create some selling pressure.

“If we can’t break above $1,300 next week then the question we have to ask ourselves is: where do we go from there?” he noted.

Jessica Fung, market analyst at BMO Capital Markets, is also watching the U.S. dollar; however, doesn’t think it will have much impact on gold prices as she expects the metal to continue to hang around the $1,270 area in the near-term.

“Gold is battling some headwinds like a stronger U.S. dollar and seasonal factors but there are also strong supportive factors like low interest rate expectations,” she said. “There is potential for the U.S. dollar strength but those gains will be limited as markets are not expecting the Federal Reserve to raise interest rates in June.”

Ronald-Peter Stoeferle, fund manager at Incrementum AG and author of the In Gold We Trust Report, is also neutral on gold prices, despite his bearish outlook on the U.S. dollar and the U.S. economy.

He noted that gold looks a little over-extended in the near-term as speculative interest is near historic levels.

“I think we could expect to see a textbook consolidation in gold in the near-term,” he said.

Stoeferle added that he is paying attention to equity markets to determine gold’s next move. Corporate data is worsening, he continued, which could weigh on equity markets, prompting for diversification in gold.

While Fed Minutes and inflation data will take center stage next week, other important economic data next week include regional manufacturing surveys and housing market data.