(Kitco News) - Although minutes of the April Federal Open Market Committee monetary policy meeting shocked markets this week by increasing the probability of a June rate hike, one U.K.-based research firm believes that this will have a limited impact on the gold market.

Already the gold market is shaking off increased expectations of an interest-rate hike next month, with June Comex gold futures trading at $1,259 an ounce, up $4.20 on the day. 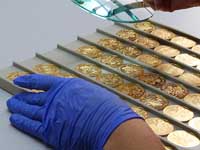 Julian Jessop, head of commodity research at Capital Economics, said that he is not surprised that gold has managed to stabilize after falling to a three-week low as the impact of the Fed’s monetary policy is not so cut and dry.

“The gradual return of U.S. rates towards more normal levels should still be offset by other, more positive factors,” he said in a report published Friday.

Higher interest rates are traditionally negative for gold because it strengthens the U.S. dollar and raises the metal’s opportunity costs; however, Jessop said that it is important to look at the overall market.

Jessop explained that nominal rates could go higher, but rising inflation means that interest rates in real terms will remain low and even in negative territory.

“Gold can still rally, especially if U.S. wage and price pressures continue to build. Indeed, even our forecasts assume that the Fed will continue raising rates only gradually and to a still low level by past standards,” he said.

There are already signs of rising inflation as the Consumer Price Index showed that core inflation rose 2.1% for the year last month. While this isn’t the central bank’s preferred inflation measure, analysts have noted that it has an impact on inflation expectations.

“The data shows that there is a clear danger that the Fed is already behind the curve,” said Jessop in an interview with Kitco News.

Not only is the Fed struggling with inflation, but aggressive tightening could negatively impact equity markets, which Jessop said would be positive for gold.

“Gold might then benefit from resurgence in safe-haven demand if the prices of other assets, particularly equities, crashed. Either way, we remain comfortable with our end-2016 forecasts of $1,350 for gold and $19.50 for silver,” he said.

Jessop also explained that although the risks for a June rate hike have increased, they are still a long way from being a done deal. Currently Capital Economics is expecting the central bank to move in September and December.

“We see the probably of a rate hike in June above 30% but below 50%,” he said. “There is still a lot of uncertainty but a lot can happen between now and the next meeting.”

Jessop added that a positive May employment report, which will be released almost two weeks before the next monetary policy meeting, could solidify a move in June or maybe July.

But even if economic data does improve, the U.K. referendum on whether to remain part of the European Union could create enough uncertainty to stay the Fed’s hand.