Will the Consensus Win or Eventually Shift?

(Kitco News) - Against the consensus investments have been among the best performing recently. At the beginning of 2014, the consensus was the Fed was going to end QE3 and Treasury bond yields and commodities would increase. QE3 ended, but the opposite happened. Does it mean nothing when the consensus is that wrong? Not to most investors. Gold and US Treasury bonds were completely against the consensus at the end of 2015.  As we approach Memorial Day, they have been among the best performers. Despite most economists warning of increasing yields, US Treasury bonds have consistently been among the best investments the past few years. The chart below depicts the performance of the three most widely traded ETF’s reflecting gold (GLD), US Treasury bonds (TLT) and the S&P 500 (SPY) since the end of 2013. The trend is your friend, until it isn’t. The trend in TLT remains up. For Treasury bond investors to truly believe the risks of inflation and an expanding economy, they probably need to experience at least a few quarters of losses. Although down this week, year-to-date, TLT is up 8.7% compared to +0.7% in SPY and +18% in GLD (as of 5/19).  Are these markets completely off base, or is the Fed and the consensus due for a shift? At this extended stage in normal economic cycles and stock bull markets, most investors should be willing to experience some losses on bond and gold investments, notably if it means the primary asset class, the stock market, will resume giving similar to the past 6 years.

The negative gold consensus has barely shifted. The positive performance of gold in 2016 has been essentially a mean reversion from an extreme oversold condition at the end of 2015. The $1,000/oz. level held support and $1,300/oz. is holding resistance. It may take a while of knocking around in a range, likely between $1,200/oz. and $1,300/oz.  Absent some unlikely sustained real inflation, for gold to sustain above $1,300/oz., it will likely take a shift in Fed tightening expectations. For that to happen, the data, which is generally very much lagging, will likely have to shift toward a recession, or the markets will need to provide an impetus, i.e. the stock market going down. For the past few years, the sustained, against the consensus rally in the US Treasury bonds has been a potential warning of a less optimistic economic picture.

Treasury bonds have been among the best performers. Gold appears to be catching up. 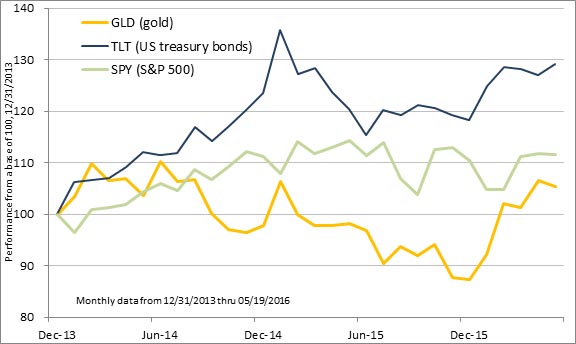 Sep 27 The Fed will not be issuing a digital dollar anytime soon, says Powell
Sep 27 Celsius CEO Alex Mashinsky submits his letter of resignation, effective immediately
Sep 27 FTX US wins the auction for Voyager Digital's assets
Sep 27 Russia to use the digital rouble for settlements with China in 2023
Sep 27 Gold sees short-covering bounce but analysts look for prices to test $1,600