McEwen Mining is a prime example of a mining company that is reaping the benefits of lower production costs, higher gold prices and higher production improving its balance sheet.

The company held its Annual General meeting May 31, with the company highlighting its balance sheet growth since the start of the year. As of May 27, the company saw its cash holdings rise to $33.26 million, up from $25.87 million as of Dec. 31 2015. 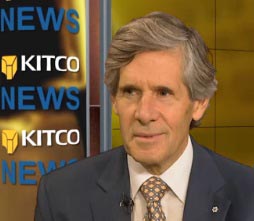 Since December 2014, the company has seen its cash reserves increase by 168%, its gold and silver inventory increase 341%, and its investments increase by 78%.

In an interview with Kitco News, Rob McEwen, CEO of McEwen said that the company doesn’t have any purchasing plans on the books this year; however, he added that you can never say never if they find a project with the right price.

“I think now would be a good time to buy but you have to find the right price. I wouldn’t want to buy something that is overvalued,” he said.

McEwen said the company’s general plan is to continue to accumulate capital, which he explained will be needed in 2017.

“We are planning to start construction of our Gold Bar project in the first quarter of 2017. The capex costs are expected to be around $60 million and we expect to be able to internally fund at least two-third of the construction costs,” he said.

According to the company’s feasibility study for its Gold Bar property in central Nevada, construction is expected be finished by 2018. The mine is expected to produce 65,000 ounces of gold per year with estimated per ounce cash costs of $728.

Another benefit of the company’s increase in cash holdings is that McEwen got a raise.

“After working for almost 10 years without a salary I have been given a raise to $1 a year,” he said. “I guess with a 169% increase in cash reserves, the board felt comfortable to pay me something.”