(Kitco News) - The silver market ended Wednesday with its biggest one-day gain since April 19 as analysts say the grey metal is playing catch up with the gold market.

Phillip Streible, senior market strategist at RJOFutures, said that he is not surprised that silver is starting to outperform gold. He noted that silver was a lot more beat up falling more than 11% in last month’s correction, while gold only lost 6.5%. 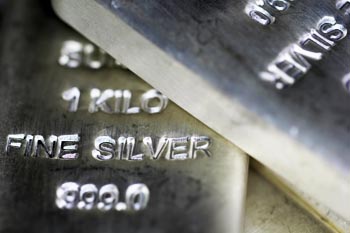 “In a day that saw gold perform really well, it is not surprising to see silver outperform,” he said. “I think it is one of the most undervalued metals even at $17 an ounce.”

Sean Lusk, director of commercial hedging with Walsh Trading, agreed that silver is a little more attractive as an investment compared to gold because of its sharper selloff.

“We are seeing a continuation of buying that started Friday after markets starting repricing Federal Reserve interest rate expectations,” he said. “I think silver has come down to a level that makes it an attractive buy back for traders.”

Streible added that silver could be benefiting Wednesday as a straight commodity playe as Chinese import data overnight showed decent demand for commodities.

Looking at where silver could go in the near-term, with the metal closing above initial resistance at $16.95, analysts at iiTrader said that the next level they are looking at is between $17.135 and $17.32.

Streible said that he is cautiously optimistic on silver as there are still some headwinds the market faces. He added that there is a lot of money sitting on the sidelines.

“I think we need to see gold recapture its recent highs and a push above $18 [in silver] would go a long way to attracting new momentum in the marketplace.”