Gold To Push Silver Higher as Fed Hikes Go Out The Window: Rickards

Gold and silver futures continue to hold onto gains Tuesday, hitting multi-year highs this month. August Comex gold futures last traded up $12.50 at $1,351.50 an ounce while September silver is trading near a two-year high at $19.815 an ounce. 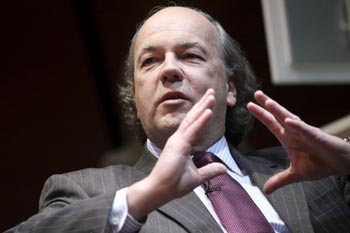 “Part of the reason gold is going up is because people are losing confidence in central bank money, from all central banks,” Jim Rickards, author of The New Case for Gold, told CNBC Tuesday.  Speaking on the Federal Reserve, in particular, Rickards said the U.S. central bank’s credibility is “already in shreds” and will likely get worse as interest rate hikes don’t materialize, which should continue to help the metals.

“December maybe, but I doubt it. Definitely not ahead of the election,” he explained.

Based on CME’s FedWatch Tool, futures markets are pricing in no chance of a rate hike this month, while only a 5.9% for both September and November Fed meetings, and a 17.8% chance in December.

Rickards also speculated that the Fed could be politically motivated to stay its hand as an interest rate hike could support a Donald Trump presidency.

“If they raise rates this year, certainly before November, that’s probably enough to put the U.S. into recession and elect Donald Trump,” Rickards noted. “I dare say that’s the last thing they want so I think it’s another reason why we can take rate hikes off the table.”

Rickards noted that he views gold as a form of money and the dollar price of the metal is simply the inverse of the dollar value; and given that he expects Yellen to weaken the dollar, gold should move higher.

“She needs the weaker dollar to import inflation to the U.S. [It] is nowhere near its inflation target,” he said.

“So, I’m looking for ease from the Fed in the form of forward guidance indicating they won’t raise rates. That means weaker dollar, stronger euro, stronger yen, also means a higher dollar price for gold and silver.”