(Kitco News) - A day after increasing its gold forecast for 2016 and saying the market has entered the early stage of its next bull run, Swiss bank UBS is at it again, increasing its silver forecast more than 4%. 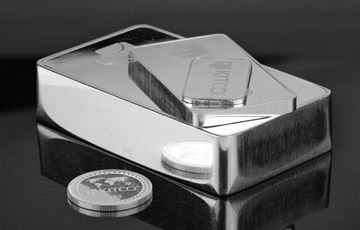 While Teves is bullish on the grey metal, she admits that it will be a choppy road higher.

“We continue to expect that silver would struggle to consistently outperform gold inasmuch as the main driver is strategic portfolio allocation amid an uncertain macro picture,” she said. “The most conducive scenario for silver, in our view, is if gold stays buoyant while risk appetite improves.”

Teves said that the key to the silver market will be the gold-to-silver ratio, which has fallen to around 69 because of silver’s strong performance. The ratio historical average stands around 60.

“We expect investors to be watching the gold:silver ratio closely for signals to get involved more than fundamental market drivers for now. During periods when the ratio becomes extreme, investors are likely to get attracted to silver,” said Teves.

Wednesday, UBS increased its short-term target for gold to $1,400 an ounce.

UBS isn’t the only bank that is upgrading its silver forecast. Wednesday, Jim Steel, senior precious metals analyst at HSBC, said that he thinks the metal has potential to reach $21.50 an ounce this year.