(Kitco News) - The pervasive bullish sentiment towards gold continues as prices maintain solid gains and has one Wall Streeter saying the secular bull market is back in full force. 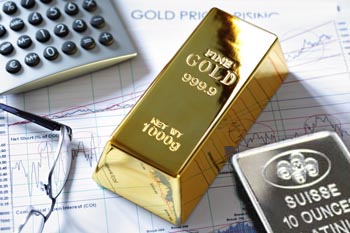 “After rallying for 12 straight years and peaking in September 2011 at around $1,900 per troy ounce, gold fell into a very lengthy bear market that I believe ended in December 2015 at $1,050,” said Peter Boockvar, the chief market analyst for the Lindsey Group, in a CNBC post Thursday.

Given current central banking policies that are pushing other fiat currencies down, he continued, gold and silver will rally further as they will be the “last currencies standing.”

“The secular bull market in both that began 15 years ago has resumed again after the 4 ½ year cyclical bear market and the behavior of central banks and what they are doing to their respective currencies is the main reason why,” he explained.

“If I am correct, a new bull market usually takes assets to levels above the previous highs and thus I believe there is a further ways to go in the years to come.”

Although gold prices have come off recent highs, the metal is still holding above $1,350 an ounce. August Comex gold futures last traded down $13.30 at $1,353.8 an ounce. Meanwhile, silver has stolen the show, hitting a two-year high earlier in the week. September silver last traded down 2.84% on the day at $19.63 an ounce.

“What looks best against money that penalizes the holder? Gold and its little but more hyperactive sibling named silver,” he said. “We are truly living in a world of monetary mayhem where modern day central banking has embarked on an experiment that is now going haywire.”

Boockvar has been bullish on gold for the last few months. In May, he said that gold can not only rally to its 2011 high of $1,900 an ounce, but also likely surpass that level.