(Kitco News) - Donald Trump is now the Republican nominee and a true contender of becoming the next president of the United States. Yet, analysts at one bank say the uncertainty from a Trump presidency could be enough to push gold prices over $500 higher.

Although Dutch bank ABN Amro thinks it unlikely, a Trump-run America would support gold prices simply because his policies would weaken the U.S. economy. 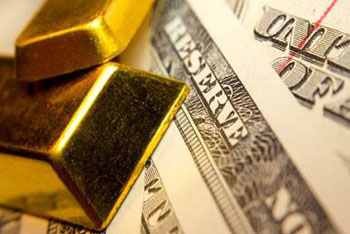 “In addition, his rhetoric and possible policy actions could create domestic and international uncertainty at best, and upheaval at worst,” said Georgette Boele, ABN Amro’s coordinator of forex and precious metals strategy, in a research report Friday.

“This will likely result in a more substantial rise in gold prices towards USD 1,850 an ounce over the coming years,” she added.

Another possible, yet less likely, scenario is if not only Trump becomes president but Republicans also get a majority in both the House and the Senate, Boele noted.

“[W]e think that political risks resulting from uncertainty will be high under this scenario. The U.S. economy would be more isolated and trade growth would be weaker than otherwise. Meanwhile foreign direct investment would likely be hurt,” she wrote. “In this scenario, economic growth would be softer. The debt/GDP ratio would increase significantly. The policy shifts proposed would cause significant uncertainty, which would also weigh on the economy.”

Under these circumstances, gold would likely perform well.

However, the more likely scenario, Boele continued, is for Democrats to win the election, which would also be price supportive for gold because of the resulting economic environment: higher inflation than growth, negative real interest rates and a negative longer-term U.S. dollar.

“All in all, gold prices will likely rise at a moderate pace towards USD 1,650 an ounce over the coming years.”

ABN Amro has not changed its forecasts for the yellow metal, still expecting gold to average $1,300 an ounce this year.