(Kitco News) - Coeur Mining, Inc. (NYSE: CDE) reversed to a profit in the second quarter as silver-equivalent production and prices of precious metals rose at a time when the company was cutting costs.

Adjusted net income for the second quarter primarily excludes foreign-exchange losses, fair value adjustments to royalty obligations, and gains on sales of non-core assets. Second-quarter cash flow from operating activities was $45.9 million, compared to $36.9 million in the second quarter of 2015. 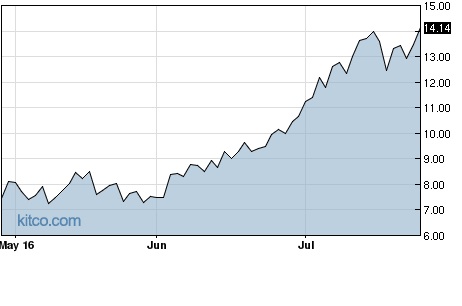 Adjusted all-in sustaining costs per realized silver-equivalent ounce fell to $13.27 from $14.81 in the same quarter of 2015.

"Along with our strong operating and financial performance, we achieved two significant milestones subsequent to quarter-end -- the satisfaction of the minimum ounce obligation on Palmarejo's Franco-Nevada royalty and the repayment of the $100 million term loan,” said Mitchell Krebs, president and chief executive officer. “The transition to the improved Franco-Nevada terms represents a watershed event, positioning Palmarejo to be a significant contributor to free cash flow going forward. Combined with the debt repayment and the commensurate reduction to interest expense, our operations are poised to generate significant free cash flow in the second half of 2016.”