(Kitco News) - For most of the year platinum has been a laggard with the global growth concerns weighing on the metal’s industrial demand, but sentiment is shifting as retail investors are jump into the market. 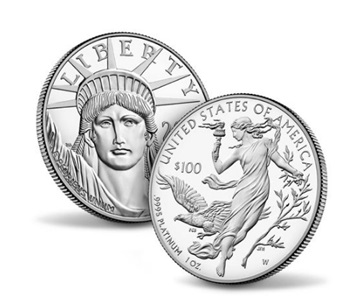 The U.S. Mint is reporting unprecedented demand for its limited one-ounce American Eagle Platinum bullion coins as its inventory has been almost completely depleted after releasing the coin only two days ago.

According to the mint’s daily sales data, 18,400 coins have been sold after being made available to authorized purchases July 26. This is the first time the mint has offered a platinum bullion coin since 2014 when it sold 16,900 one-ounce coins, which was the first time the coin was produced since 2008.

The new bullion coin comes as platinum prices have soared so far this month, up almost 11% since July first, outperforming gold, which has seen a gain of 0.7%; at the same time silver prices are up 7.4% so far this month. For the year platinum is up 27%, while gold has rallied more than 25%.

Peter Hug, global trading director at Kitco.com, said that historically platinum has traded at a premium to gold.

“An environment where risk appetite is up, equities are at the highs and gold is holding well above $1300 is conducive for PGMs to do well,” she said.

Jan 26 Our new normal
Jan 26 Threatening inflation is finally showing; how will the Fed respond? Steve Hanke
Jan 26 Why gold price is not at $6k already and why it was 'managed' by the government - Luke Gromen
Jan 26 Bitcoin's volatility could drop below that of gold, says Bloomberg Intelligence
Jan 26 Lithium Chile Reports 29.5 g/t Gold - Highest Gold Grade Assay to Date on Its Carmona Property