Brexit May Be Far From Over – Nouriel Roubini

(Kitco News) - Although Europe’s Brexit “hangover” seems to be over, with markets having stabilized somewhat since the initial shock, one famed economist is not convinced the region is in the green just yet.

“[T]he risk of European and global volatility may have been only briefly postponed,” noted Nouriel Roubini in his latest Project Syndicate post.

“Leaving aside other global risks (including a slowdown in already-mediocre U.S. growth, more fear of a Chinese hard landing, weakness in oil and commodity prices, and fragilities in key emerging markets), there is plenty of reason to worry about Europe and the eurozone.” 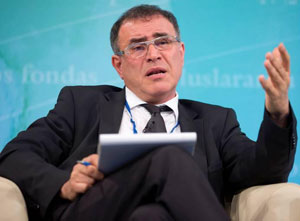 The Brexit shock moved markets significantly, as gold saw its biggest daily jump since the financial crisis while the British pound plunged to 30-year lows; however, as Roubini pointed out, the market turmoil only lasted about a week and didn’t necessarily affect investors outside of the U.K. and Europe.

“The shock was regional rather than global, with the market impact concentrated in the United Kingdom and Europe, and the volatility lasted only about a week, compared to previous two severe risk-off episodes, which lasted about two months and led to a sharp correction in U.S. and global equity prices,” he said.

Given that the U.K. accounts for just 3% of global gross domestic product, the market impact was limited; however, the spillover effects of Brexit on Europe could be far greater, according to Roubini.

“[A]n ugly divorce may also lead Scotland and Northern Ireland to leave the U.K. In that scenario, Catalonia may also push for independence from Spain. And without the U.K., Denmark and Sweden, which aren’t planning to join the eurozone, may fear that they will become second-class members of the EU, thus leading them to consider leaving as well,” he said.

Another country that may choose to leave is Italy, which Roubini said is “too big to fail” given that it is the EU’s third-largest member and has €2 trillion ($2.2 trillion) of public debt (135% of GDP). No EU program can back up that debt, he said, not to mention the country’s already shaky politics, anemic growth and failing banking system.

However, Roubini noted that it is unlikely for the EU to disintegrate suddenly.

“But finding ways to integrate that are democratic and politically acceptable is imperative. Muddling through has resulted in an unstable equilibrium that will make disintegration of the EU and the eurozone inevitable. Given the many risks Europe faces, a new vision is needed now.”