(Kitco News) - One fund manager is recommending that investors forget about focusing on the minutiae details of a potential rate hike and instead should look at the overall picture, which highlights a growing environment of real negative interest rates. 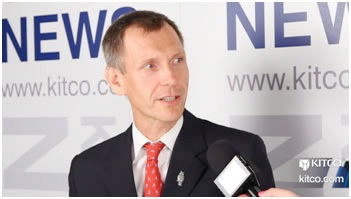 In an interview with Kitco News, Axel Merk, president & CIO of Merk Investments, said that even if the Federal Reserve does hike rates later in the year, they will still be behind the inflation curve, which should continue to attract gold buyers. Gold prices have hit a three-week high Tuesday as sentiment for the yellow metal continues to improve. December gold futures last traded at $1.373.10 an ounce, up $13.50 an ounce.

Merk’s comments come after the Federal Reserve left the door open for a potential interest rate hike later in the year by noting “Near-term risks to the economic outlook have diminished," in its latest statement.. However, gold has managed to hit three-week highs because there was no explicit comment on a potential rate hike.

“You can argue both ways on the economy and whether or not the Federal Reserve will raise interest rates,” he said. “But what matters for the price of gold, ultimately, is: will we see positive interest rates? I don’t even see how a hawkish Fed can achieve that.”

As to what’s in store for gold, Merk said that the market will continue to see periods of weakness and higher volatility; however, he added that global negative interest rates has helped to broaden the gold market as investors search for safe-haven assets that have low correlation to other assets.

Merk also said he sees further potential for the yellow metal as U.S. growth continues to weaken, dragging down the U.S. dollar.

“We are closer to the top in the U.S. interest rate cycle. It is one of the reason why I am negative on the U.S. dollar… I don’t think the Fed can do much more and the U.S. economy is going to lose steam.”

Merk added that he also expects the U.S. presidential election to create an opportunity for higher gold prices later this year. He added that both candidates create risk for an already fragile U.S. economy.

Aug 16 Is $100k Bitcoin next after crypto hits bottom?
Jul 27 Crypto bankruptcy proceedings to slow massive selloffs that triggered the bear market  Kaiko
Jul 19 This is how Bitcoin benefits in this crypto bear market
Jul 13 Will U.S. CBDC come about from crypto failures and will it be sovereign? CBDC expert weighs in
Jul 4 Bitcoin as a global standard would be an 'absolute economic catastrophe' - Ernst & Young's global blockchain leader