(Kitco News) - As central bankers continue their “greatest experiment in monetary policy in history,” it is important for investors to focus on preserving wealth, this according to one member of the Rothschild banking family. 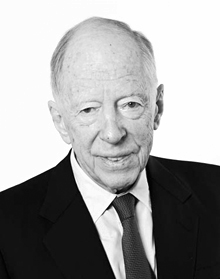 One way to do that is with gold, noted Jacob Rothschild, chairman of London-based RIT Capital Partners, in a letter to shareholders Monday.

“In times like these, preservation of capital in real terms continues to be as important an objective as any in the management of your Company’s assets,” he wrote. As such, the firm has reduced its exposure in equities and the Pound Sterling to 44% and 25%, respectively.

At the same time, Rothschild said they increased exposure in gold and precious metals by 8% by the end of June.

“We are therefore in uncharted waters and it is impossible to predict the unintended consequences of very low interest rates, with some 30% of global government debt at negative yields, combined with quantitative easing on a massive scale,” he wrote. “Nearly all classes of investment have been boosted by the rising monetary tide. Meanwhile, growth remains anaemic, with weak demand and deflation in many parts of the developed world.”

He added that many risks remain in the marketplace including the geopolitical situation in UK post-Brexit, the U.S. presidential election, slow growth in China, and unrest in the Middle East. These factors should continue to bode well for safe-haven assets such as gold.

Rothschild also said he even prefers the yellow metal over its main rival: the U.S. dollar

“Our significant US Dollar position has now been somewhat reduced as, following the Dollar’s rise, we saw interesting opportunities in other currencies as well as gold, the latter reflecting our concerns about monetary policy and ever declining real yields.”

Based on the company’s latest financial report, RIT Capital Partners held £22.9 million in the Blackrock Gold & General Fund and £7.6 million in gold futures as of June 30, 2016. The financial statement also shows £1.5 million holdings in silver futures.   The net assets now amount to £2.6 billion, which Rothschild noted was a “new all-time high” for the firm.

“The outcome of our efforts over a difficult period has been for your Company’s net asset value at the end of June to have increased by 3.6% (including dividends) to 1,613 pence per share,” Rothschild said.