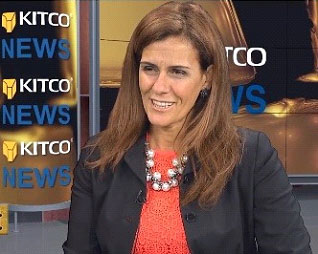 The London gold fix, the benchmark used by miners, jewelers and central banks to value the metal, may have been manipulated for a decade by the banks setting it, researchers say.

Kitco News’ obtained the court document which contained the opinions of presiding Judge Valerie Caproni of the US District Court. Judge Caproni said in her opinion that the plaintiffs "plausibly allege that each of the Fixing Banks acted recklessly in creating artificial price dynamics in the gold markets around the PM Fixing."

Kitco News reached out to Rosa Abrantes-Metz, the key economist who provided the evidence of collusion and manipulation.

Kitco : What does  the case highlight?

Abrantes-Metz: “Prices move primarily downwards leading up to and during the London Gold Fixing, and they do so too often.  This is part of the evidence I prepared which is consistent with artificially low prices, which allegedly benefit of defendants.”

Kitco : Could it be a game changer? How?

Abrantes-Metz: “If proven that defendants colluded to manipulate the market for at least one decade, then potentially anyone trading gold could have been affected.  Many more complaints may be filed around the world and of course, an additional sense of mistrust in the system, on top of all of the other known rigging of key benchmarks.  Therefore, the importance of this decision extends beyond current plaintiffs.”

Kitco : How much longer until a verdict?

Abrantes-Metz: It usually still takes several years since the complaint defeats the motion to dismiss.

Kitco : What do you say to people who say not all manipulation is bad but part of the game

Abrantes-Metz: “Manipulation is not only bad, it is also illegal.  Yes, it is often part of the game, a rigged part of the game.  For over a decade that I have been developing empirical screens (as in this gold case), in order to assist in detecting this type of rigging.  I am a believer in markets, but also know well (given my work across many markets) that they can be and have been abused.

After more than 100-years of its auction-based system, the London Gold Fix ended in March of 2015 as the allegations of market manipulation started to grow.