What Rally? Gold’s Been In A Downtrend All Along – Commerzbank

(Kitco News) - Gold’s push below its 200-day moving average at $1,260 an ounce has severed its 2016 uptrend, and an analyst at one German bank sees gold re-entering its long-term bear market again. 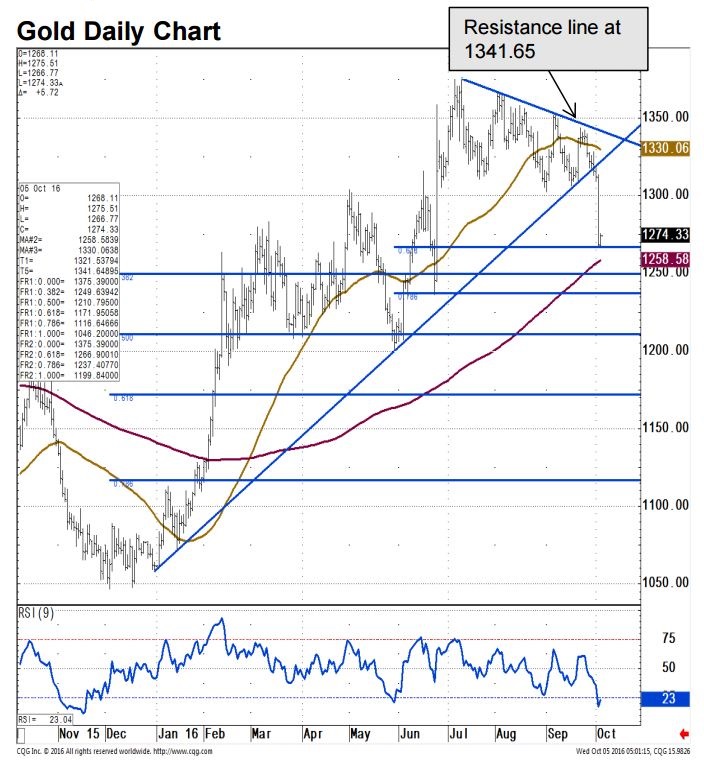 Although gold at its highs this year was up almost 30%, Karen Jones, technical analyst at Commerzbank, said in a telephone interview with Kitco News that the more important trend to watch has been the long-term downtrend that has been in place since 2011.

She noted in her charts that four times gold tested the 2011 resistance levels around $1,350 and was unable to break it.

“We have literally spent months pushing into this downtrend and have failed to break it and as a result we have severed the uptrend,” she said. “Any market that tests a long-term downtrend and then sells off with such speed isn’t messing about.”

Jones added that the fact that gold has severely broken through most of its major support levels so far this year in the last two days could be an indication that the rally since the start of the year was nothing more than a larger correction in the long-term bear market.

“Given the speed of the break, there is no reason why we shouldn’t go lower,” she said.

“1,200 is going to a key level because that is the last reaction low of this recent move up. Once that is taken out, we will be well into re-establishing the bear trend.”

Although not quite as bearish on silver, compared to gold, Jones said that she thinks it’s only a matter of time before the grey metal follows in gold’s footsteps. December Comex silver futures last traded at $17.35 an ounce, down almost 2% on the day.

“Silver hasn’t seen as much damage as gold but I am merely waiting for its levels to break.”

So far, silver futures have managed to trade above their 200-day moving average, which comes in at $17.082 an ounce. Jones added that for silver to stand a chance, this level needs to hold. The next level of support comes in at the 55-week moving average at $16.54 an ounce.

“At any point we get a close below the 55-week moving average, I will have a more negative stance on silver,” she said.

Jul 27 Crypto bankruptcy proceedings to slow massive selloffs that triggered the bear market  Kaiko
Jul 19 This is how Bitcoin benefits in this crypto bear market
Jul 13 Will U.S. CBDC come about from crypto failures and will it be sovereign? CBDC expert weighs in
Jul 4 Bitcoin as a global standard would be an 'absolute economic catastrophe' - Ernst & Young's global blockchain leader
Jun 24 What if the Fed can't stop inflation? This is when Bitcoin's bear market could reverse