Cobalt Prices On The Rise Amidst Ethical Concerns

(Kitco News) - Cobalt, as we reported previously, is the secret ingredient in lithium ion batteries. Battery-electric vehicles like Tesla’s contain approximately 50kg, or about 10% of the total battery weight, in every car. As we had anticipated, the price of cobalt went up by more than 20% over the past six months (from around $10.80/lb to now $13.40/lb).

In addition to an increase in demand, recent reports of unsafe conditions and child labor emerged in a report by Amnesty International, shocking a customer base with firm environmental and ethical values.

How will this affect the market? We spoke with William Hattan, an independent metals investment advisor and expert on cobalt.

“In recent times there were stockpiles and excess inventory from the previous period of overproduction keeping the price down”, explains Hattan. These reserves have now been used up. “Cobalt is only a 100,000 ton /year market. If there is a shortage in supply by even 5 or 10% which we expect to hit by the first half of next year, then you are going to feel that”. 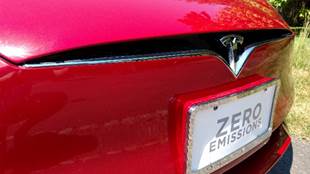 A lot of large consumers are trying to get into long term contracts at this point because they are seeing the future, and they worry about the escalating prices in cobalt. Hattan: “An additional problem is that the battery market, which is not just in electric vehicles but also in smartphones and other portable electronic devices, once consumed about 40% of the available cobalt. It is now closing in on 50% because of the demand in electric vehicles. You have Tesla, BMW, Nissan, GM, Mercedes Benz… it’s going to be a very competitive market”.

70% of all cobalt is a by-product from nickel and copper mining. As a result of the poor prices for nickel and copper last year, a lot of mines have been shut down, contributing to a reduced availability of cobalt.

The sad news about the horrific conditions in cobalt mines in the Democratic Republic of Congo (DRC) is that there is no way to get away from the metal soon. The market for battery powered vehicles and devices is in a seemingly unstoppable growth pattern, leaving less metal for the aerospace industry that is already backlogged for high grade material.  Not to mention new applications for cobalt like the emerging market for industrial gas turbines (IDT) where the metal’s content is anywhere between 4 and 10% of the turbine alloy.

Companies like Apple and Samsung, among others, made commitments to find ethical supply sources in the near future. “They will have to dig a little deeper because there are not a lot of new copper and nickel mines coming on stream”, says Hattan. “There is only one in the U.S. that I am aware of, Formation Metals out of Idaho, that is one or two years away from going into production. Based on the numbers we see there is definitely going to be a short-term squeeze. By the first half of next year, I would be very surprised if the market doesn’t reach at least 16-17 dollars per pound, for battery grade material. The average price of cobalt has been $18-20/lb over the past 15 years. For the metal to go back to these levels in 2017 is very realistic. In two years, I could see it trading as high as $25/lb”

Will we ever see cobalt’s all-time highs $30-40 again? Hattan is optimistic: “The combination of all these factors make for very bullish news for cobalt”.