Hecla Expects Most Annual Silver Output In Its 125-Year History

(Kitco News) - Hecla Mining Co. (NYSE: HL) posted a large jump in silver production during the third quarter and projects the most annual silver output in its 125-year history, the company said Tuesday.

Third-quarter silver production soared 67% from the same period a year ago to 4,316,664 ounces, the company said. This was helped by higher grades at established mines and nearly 1 million ounces of output from the company’s newest mine, San Sebastian in Mexico, which began producing ore in December 2015. 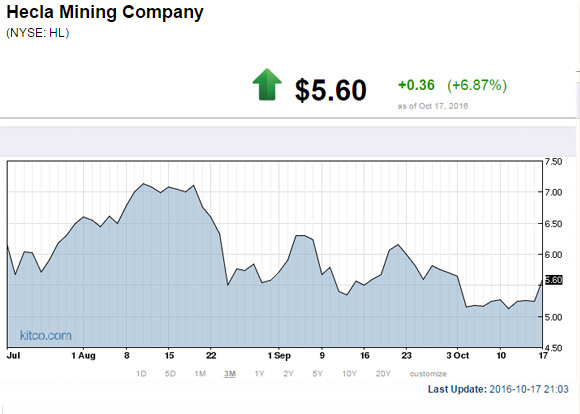 “The strong performance from all our mines enables us to increase our silver-production estimate to 16.25 million ounces for 2016, the highest silver production in our 125-year history,” said Phillips S. Baker, Jr., president and chief executive officer. The previous estimate was 15.75 million.

Hecla reported that cash, cash equivalents and short-term investments totaled some $192 million as of Sept. 30, an increase of about $33 million for the quarter. This includes $16 million of insurance proceeds for the Troy Mine reclamation.

Silver output at Hecla’s Greens Creek mine in Alaska jumped 23% year-on-year to 2,445,328 ounces, helped by higher grades, although gold output there was down. Silver production at Lucky Friday in Idaho jumped 50% to 887,365 ounces, helped by higher grades and ventilation repairs. The San Sebastian mine produced 975,610 ounces of silver and 8,189 ounces of gold from July through September.