Before Gold Rallies, Look For One More Test Of Support – Tech Analyst

(Kitco News) - According to one technical analyst, the gold market and the mining sector could see one more test of support in the near-term before they resume their multi-year bull markets.

Avi Gilburt, independent trader and creator of elliottwavetrader.net, said in a telephone interview with Kitco News that he is currently watching the VanEck Vectors Gold Miners ETF (NYSEARCA: GDX) to see if it will hold support between the $20 to $22 region, signaling whether or not the sector remains in a bull market. Gilburt added that he prefers to trade the GDX because it offers the best leverage to gold prices. 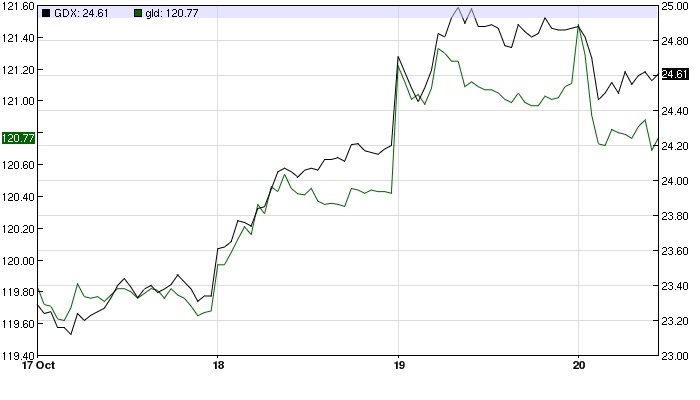 Although prices are off of recent lows, last trading at $24.58 a share, Gilburt said that he does not think that this correction process is over just yet.

“I suspect that the market is in the final throes of this correction” he said. “I would like to see one final test of support before we move higher.”

Gilburt added that as long as support holds, he could see GDX rallying to $60 or $70 a share within the next 12 months.

Right now, Gilburt continued, the market is in a simple but important juncture that could define its future trend. The ultimate line in the sand for the mining sector is $19.80, he continued, adding that that a break below this level would signal that prices are ultimately headed lower and resume its bear-market.

However, he remains bullish for now on the market. He explained that his mining portfolio still has an exposure of 60% to 65%, noting that he is waiting for prices to fall and hold at least $22 before he starts adding to his positons again.

“This is the first real test of the bull market this year,” he said. “As long as support holds then the bias is for prices to continue to move higher. If support doesn’t hold this, this tell me that this was the final rally in bigger bear market.”

Sep 26 Investors should be overweight commodities and half of that in gold - abrdn's Minter
Sep 22 Investors want to hold on to their gold as the pain from rate hikes is coming - SSGA's George Milling-Stanley
Sep 16 A digital dollar would allow Americans to directly open up an account at the Fed
Sep 13 Silver's 'buy signal' and why it is a good idea to hold commodities in recession, Goehring & Rozencwajg weighs in
Sep 6 Ethereum Merge is a generation-changing event - Valkyrie Investments