(Kitco News) -Nikola Tesla, is the first and last name that has now became two faces of the electric-vehicle market with Nikola Motor riffing off the iconic Tesla brand. Nikola Motor is the first company to announce an all-electric “class 8” heavy duty truck, an apparent extrapolation of Tesla’s battery-electric sedans. 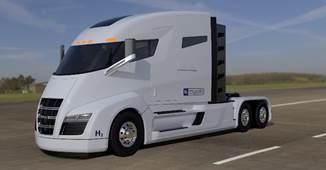 Much like Tesla’s 400,000+ preorders for their upcoming “Model 3”, Nikola reportedly received over 8,000 reservations for its new truck, 3 billion dollars in value if all orders are confirmed. But this is where their paths split.

“Fuel cells are very efficient compared to the [electrical] grid, which isn’t”, Milton explained. “That’s why we took the plug off. We didn’t want people to have to use ‘dirty’ energy to power our trucks”.
Elon Musk and his team have frequently trash-talked hydrogen in the past, claiming that it belonged in space ships but not in cars. How does Milton feel about that? “On a light duty car it’s a little harder to make hydrogen work because of cost. So I get where Elon is coming from. But on a heavy duty truck, hydrogen is absolutely the way to go. Battery-only will never work on a heavy duty truck because it can’t go the distance – you’d end up with a very limited range”.

It should be noted that the “Nikola One” truck will still carry a 320kWh battery. To put this into perspective: a Tesla Model S is equipped with 75-100 kWh batteries. However, the truck’s battery is charged by the fuel cell which helps boost the vehicle’s range to up to 1,200 miles, requiring just 15 minutes of refill time.

It is Nikola’s goal to be completely emission free, including the production of hydrogen. To accomplish this, the company is presently commissioning and building a series of solar farms across the country that will convert water to hydrogen by means of electrolysis. Launch date for the entire system including production trucks and 56 fueling stations is 2019.

Alas, Milton would not answer the all-important question of how much platinum his fuel cells will employ. The release of all technical information is reserved for the official unveiling of the truck on December 1st, 2016 in Salt Lake City, Utah. Milton did, however, give us some clues: “Existing designs like Toyota’s or Ballard’s weren’t quite adequate for our application as the membranes we require have to be thicker. We had to re-design the fuel cell to fit a much tougher environment. Our life cycle is 1 million miles whereas a Toyota’s or Honda’s is about 250,000 miles”.

This leaves us hopeful for platinum as a key element in tomorrow’s freight industry.