(Kitco News) - Gold prices are expected to push past $1,400 an ounce in 2017, according to one billion-dollar hedge fund. 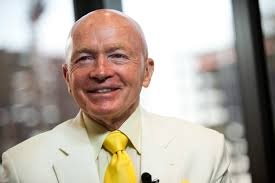 In a recent interview with Bloomberg, Mark Mobius, executive chairman of Templeton Emerging Markets Group – which has assets under management of more than £1.6 billion -- said that he could see gold prices rallying 15% in 2017 as he expects the Federal Reserve to keep interest rates low next year.

“The Fed is going to increase the rates by a little bit but not excessively and there is no guarantee that a rise in interest rates will put people off. A lot will depend on the real rates,” said Mobius, in the interview, on the sidelines at an event in Mumbai, India.

December gold futures last traded $1,262.60 an ounce, down 0.40% on the day. However, if Mobuis’ forecast proves right then gold at current levels could push to $1,451 an ounce next year.

The biggest hurdle to higher gold prices continues to be the U.S. dollar, which continued to trade at its highest level since March.

“The U.S. dollar is not that strong and may even decline,” said Mobius. “So if that happens, gold gets more expensive.”

The U.S. dollar has been firming, weighing down on gold prices as the Federal Reserve prepares to raise interest rates in December. Currently, markets are pricing in a 74% chance that the U.S. central bank will raise interest rates by 25 basis points by the end of the year.