(Kitco News) - The U.S. Mint is reporting another record year for coin sales and this time, it is for its gold-bullion products. 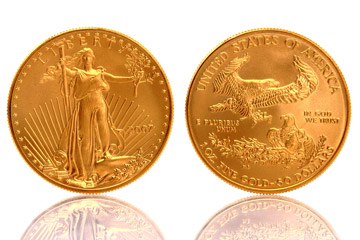 Tuesday morning, the U.S. Mint announced that it had sold out of 2016 American Eagle one-ounce, quarter-ounce and tenth-ounce coins. However, one-half-ounce American Eagle and one-ounce Buffalo coins for 2016 are still available.

According to the latest sales data compiled by the U.S. mint, 984,500 ounces of gold in various denominations of American Eagle coins have been sold this year, the highest sales rate since 2011 when one million ounces in gold bullion coins were sold.

The busiest month for coin sales this year was in November. The U.S. Mint recorded total sales of 147,500 ounces, up 27% from October’s sales figures and up more than 52% from November 2015.

The demand for bullion coins soared last month as prices dropped more than 8%, falling to a low at $1,167.90 an ounce.

However, in a recent report, commodity analysts at Commerzbank noted that the higher coin sales have not done much to put a dent growing supplies. Outflows in gold-backed exchange traded products have recently dominated the marketplace, they added.

Analysts have noted that while physical demand won’t be enough to drive prices higher, it is expected to slow down the selling pressure and stabilize the market, at the very least..

This is the third consecutive year the U.S. Mint has seen unprecedented demand for bullion coins. In 2014 and in 2015, the mint reported record sales for silver coins. However, 2016 has proven to be somewhat of a lackluster year for the mint in terms of silver products.