The Struggle Is Real

(Kitco News) - Gold is having a tough time. 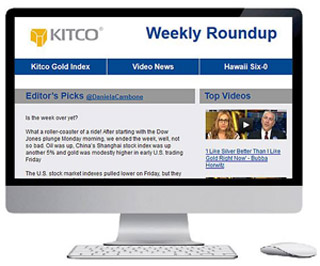 As a glimmer of hope, it also had a rough ride towards the end of 2015 to then have a reversal of fate in 2016 until this recent rough patch.

The metal is now at a 10-month low and some would argue that the cards are not stacked in gold's favor: the Fed will likely hike next week, the Dow Jones Industrial Average and the S&P500 are at record levels and ETF outflows are about to break a record -- assets in bullion-backed ETFs contracted for a 20th straight day as of Thursday, the longest stretch since May 2013.

This week, I attended Wells Fargo's annual outlook. The strategists were bullish the U.S. economy and the dollar, but the bank's head of real asset strategy John LaForge did not have good news for gold. He explained to the invite-only crowd that all commodities are in a bear super cycle that began in 2011 (when gold came off its all-time $1,900 highs).

LaForge explained that these "commodity bear super cycles" last about 20 years. During these bearish cycles, commodities like gold will tend to suffer poor performance, even as they retest recent highs and lows, LaForge said. Back in July when gold hit $1,357, he forecasted that it was not sustainable and warned of a $300 dollar drop.

I brought up these arguments to Jim Rickards, the best-selling author of Currency Wars and his latest, The Road to Ruin. Jim joined me in studio this week for his outlook, which Kitco News will publish in the coming weeks. He said he did not agree with LaForge's bear super-cycle theory because gold cannot be lumped in with other commodities. Many view gold as money, Rickards explained – as a safe haven – so when events such as Brexit occur, we see this flock to safety.

This week, we saw the European Central Bank speak with what could, at best, be described as a mixed tone -- it lowered the amount of bonds purchased in a month but extended the entire program until December 2017. Now, all eyes are on next week's U.S. Federal Reserve meeting. It is expected that the Dec. 14 meeting will see the Fed hike rates by 25 basis points, only the second increase in more than 10 years.

Mark your calendars, Kitco News launches its coveted Outlook 2017 series on December 16 – this year we have chosen the theme of the Raging Bull – which asset classes will roar back loudest in the coming year? We ask our list of guests!

In the meantime, stay safe, stay warm and enjoy the weekend.