(Kitco News) – It’s week 3 of the Expert Series, which looks at bringing Kitco News readers a chance to see how some industry experts will be investing in 2017.

This week, we bring you veteran trader and Echobay managing partner Vince Lanci, who says he’s placing all his bets on “cash, at least for the first quarter.”

PART I: Why RBC's George Gero Is Upping His Gold Bets In 2017

PART IV: Which 5 Companies is This Geo Liking? 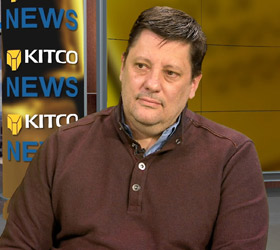 “This Trump thing has legs. If rates continue to rise, this market is going down. I'm extremely defensive right now. Stock prices are no longer moored to anything,” he said. “Only when the rest of world is long USD will we pull the plug.”

Lanci added that he wouldn’t be surprised to see gold spike if there is a black swan following President-elect Donald Trump’s inauguration in January. “That could also happen after a selloff in stocks - hence cash now,” he said.

However, Lanci is only planning to stick with this strategy for the first quarter. After that, he’ll start looking elsewhere.

Lanci’s also closely watching what happens to oil prices as he says they are the “biggest threat to stock prices after rising rates.”

It’s all about the dollar, explained Lanci.

“It will remain strong because Trump said so,” he said. “Gold floats around $1,100. It is captured. I don't see any strong move.”

Lanci added that he’d expect rising inflation, if it were to materialize, would also affect gold prices in 2017.

“Glencore as a speculative flyer I like a lot,” he added.

The three things Lanci looks at when picking a gold company?

What is your New Year’s investment resolution?

From an investment perspective, Lanci suggested completely ignoring “fundamentals and cash flows.” He added that timing knee-jerk market reactions is “where the money is at, sadly.”

If you could describe 2016 in one word, what would it be?

“Fed hikes, rates rise, and then Fed starts QE4 simultaneously; War in Syria ends; confidence increases, business flourishes, but money printing continues; Navy is the immediate focus (similar to Reagan); Trump will walk softly (he likes to be liked now that he is in the club); EU dissolution or SA revolution on radar.”

Lanci’s on Gold – The Bottom Line

“The key to gold now is the relentless U.S. dollar,” he said. However, according to Lanci, there are two ways the greenback could lose momentum, which would bode well for gold next year.

For one, any type of surprise or black swan move by Donald Trump. “Complete policy reversal to make America great by weakening the dollar as part of manufacturing push,” he explained.

Second would be if policymakers are forced to devalue the U.S. dollar to stabilize global trade, Lanci suggested.

“The dollar will weaken after rest of world currencies are in gutter,” he said. If this were to happen, Lanci’s final say was: