(Kitco News) -Jan 9. – Gold ticked higher in overnight action in London despite modest gains in the U.S. dollar index. Investors are turning back to gold as a safe-haven as uncertainty ramps up ahead of the Inauguration of Donald Trump on January 20.

Gold exchange traded funds reported fresh inflows last week in the wake of the hefty price slide seen since the November 8 presidential election. Investors, policymakers and central bankers remain unsure on how the political, fiscal, and economic landscape will actually shift once he takes office.

In the short-term:  a "V" bottom has formed on the daily Comex February gold futures chart, marking out a minor low at $1,124.30 per ounce. The near-term picture for gold has improved slightly as the metal trades above its 20-day moving average and just scaled its 40-day moving average. 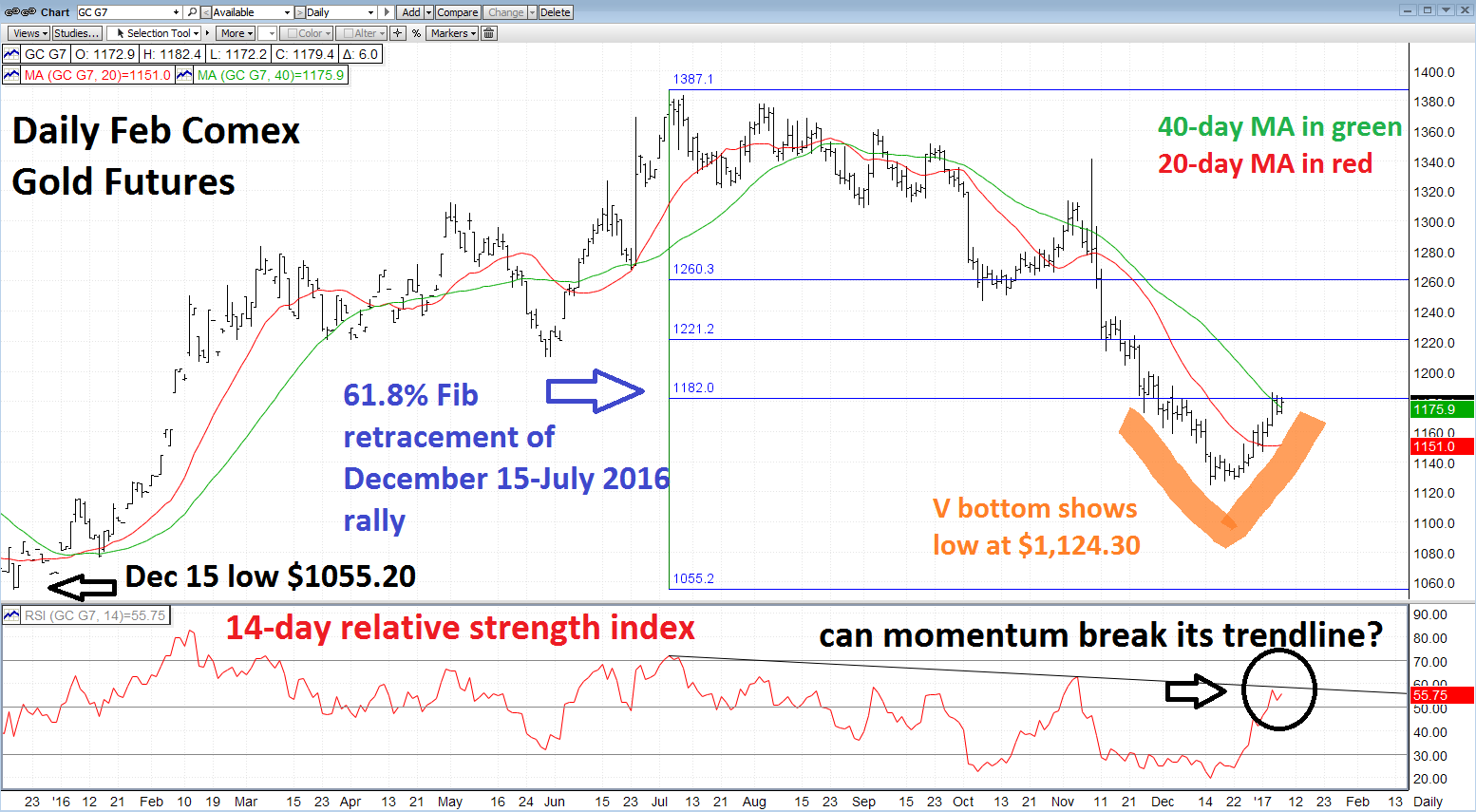 Can Momentum Break Out To The Upside?

Gold has paused and is correcting following the swift post-election sell-off. The jury is still out on whether this is a short-term correction phase or the start of a larger and stronger bottom.

Traders looking for clues on whether the gold rally can continue can monitor the 14-day relative strength index (RSI) seen at the bottom of Figure 1. A useful way to gauge fresh insight into momentum is to utilize trendlines on the RSI, just as on a price chart.

A declining trendline is drawn on the 14-day RSI from the momentum peak, which coincided with gold's summer high at $1,387.10 per ounce. A strong and sustained push above the declining momentum trendline on the RSI – currently about 58% would be a bullish signal if that were to occur.

Scenario A: If momentum breaks out above its trendline and gold sustains gains above the $1,200 per ounce zone – look for a run toward the $1,236 level at a minimum.

Scenario C: In the short-term, consolidation emerges between resistance at $1,200 and support at $1,124 per ounce. Markets are shifting into a "wait-and-see" mode with the U.S. presidential inauguration only days away.

Read more >> Will The Trump Stock Rally Continue In 2017?

Oct 20 New ETF driving bitcoin price to record highs above $65K
Oct 19 This is how TD Securities is playing gold to hedge against stagflation
Oct 19 Gold will struggle as Fed's push to normalize monetary policy supports the US dollar - HSBC
Oct 18 Hedge funds staying away from gold and silver, focus on tightening monetary policies
Oct 18 Stagflation might not be enough to save gold - Bank of America