Editor's Note: The article was updated to include recent comments from Donn Pearlman, member of the Professional Numismatists Guild,who compared the demand for President Trump coins to the Beanie Baby craze.

(Kitco News) - Coin collectors are being warned not get too caught up in Trumpmania and to be wary of buying President Donald Trump souvenirs that are being touted as rare collectable coins.

Monday, the Professional Numismatists Guild (PNG), a nonprofit organization composed of many of the top rare coin and paper money experts, issued a warning saying that these souvenirs do not make for great investments in the collectable space. 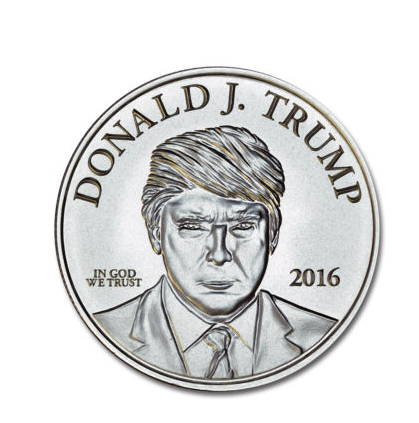 A basic search on eBay or Amazon shows a variety of Trump coins for sale, including some that are labeled as American Eagle coins -- the official bullion coin of the U.S. Mint. The U.S. Mint confirmed to Kitco that they have not minted any Donald Trump coins or metals.

“The so-called ‘Trump coins’ now in the marketplace are either privately issued tokens or medals and not legal tender coins; or are genuine U.S. Mint-produced coins that have been deliberately altered by private parties after they left the Mint; or are coins produced by foreign countries but usually intended only for collectors and not for circulation in those countries,” said Dana Samuelson, president of the PNG.

Some of the coins are selling for a few dollars while others can cost collectors as much as $70 to $80 per coin.

“Buyers today may be bitterly disappointed tomorrow if they mistakenly thought these kinds of souvenir items would be great investments,” added PNG Executive Director Robert Brueggeman.

The organization also warned precious metal investors to be weary of coins that are advertised as gold or silver plated as these are highly overvalued.

“The plating may be simply a microscopically thin layer of silver or gold that’s worth only a dollar or two. These should not be considered as investments in precious metals.  These kinds of novelty items often have little or no secondary market value,” said Brueggeman.

Trump Coins Could Be Just Another Beanie Baby Craze

In an email response, Donn Pearlman, member of the Professional Numismatists Guild said as a result of the passion surrounding the new president, he has seen outrageous prices for some of collectable souvenirs. He noted that the central African country Equatorial Guinea is selling limited edition Trump gold coins for about $3,000 and a silver coins for $100, prices well above their intrinsic precious metals content.

While these souvenirs may have “sentiment’ collector value, Pearlman added that for a collector it is important to recognize that they very possibly won’t appreciate in value.

“There are some Trump-related .999 fine silver rounds on the market priced close to "melt," but there are many more non-legal tender "coins" in the marketplace that some buyers may incorrectly assume in the future will be worth much more than their initial purchase price,” he said. “During the Beanie Baby craze, I would caution "investors" that "Perhaps the only thing rarer than some Beanie Babies will be finding someone five years from now who wants to purchase it from you for more than you originally paid for it."  I believe the same will be true for some of the so-called Trump coins,” he said.