(Kitco News) - The World Platinum Investment Council Thursday put its estimated supply deficit for the platinum market at 120,000 ounces for 2017, which would be the sixth consecutive year that global consumption outstrips supply. 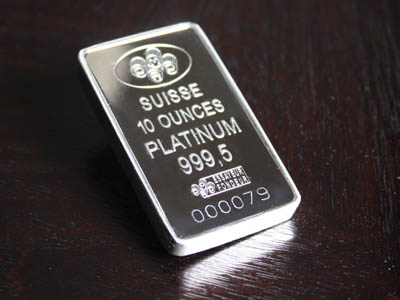 For 2017, the WPIC sees total platinum supply falling 4% to under 7.7 million ounces, with both mined and recycling expected to decline. Global demand is seen falling 6% to fewer than 7.8 million ounces, largely due to expectations for less investment demand and requirements by the petroleum sector. A marginal decline is seen in automotive demand. Platinum is used in auto catalysts.

For 2016, global platinum supply rose 1% to just under 8 million ounces as greater secondary supply from jewelry and auto catalysts outweighed a decline in primary mine supply, mainly from South Africa, the WPIC said. Demand was roughly flat at a little over 8.2 million ounces, with consumption for auto catalysts rising but jewelry demand easing.

Platinum demand by the auto sector rose 1% in 2017, with year-on-year demand from the Western Europe automotive sector higher in every quarter since the third quarter of 2015, the WPIC said. Jewelry demand in 2016 fell 11%. Meanwhile, the WPIC said net buying of platinum for exchange-traded funds was some 200,000 higher in the fourth quarter compared to the third.

"The upward revisions of the 2016 deficit and the forecast 2017 deficit, which would be the sixth consecutive annual shortfall, show that the platinum market is tightening amid solid demand and increasingly constrained supply,” said Paul Wilson, chief executive officer of WPIC.

“It is notable to see that buying of platinum ETFs spiked significantly at the end of the year, boosting investment demand for platinum. This has continued into the first quarter of 2017 as the price of platinum has risen. Should investment demand in 2017 end up matching that of 2016, this would significantly offset the decrease in total demand currently forecast for 2017.”

The WPIC is an industry organization, created in 2014 by the six leading platinum producers in South Africa, to provide market data on the platinum market and stimulate global investor demand.