Gold Thrives On Uncertainty As Oil And Dollar Fall

Analysts have weighed in on the elusive connection between lower oil and higher gold prices, as the yellow-metal rose more than 4% in the past six days to hit a three-week high. 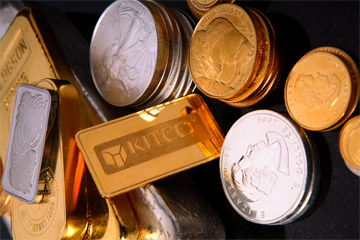 Some experts say they are convinced that lower oil is boosting gold, and are now enticing traders to pay attention to the crude-gold ratio.

“Oil broke down below $50 a few weeks ago and that has been directly influencing higher gold prices because lower oil brings Fed tightening out, it is deflationary and is also a sign of the paradigm shift in technology,” Mike McGlone of Bloomberg Intelligence said in an interview with Kitco News. “Oil dropping down is also a preliminary indication of risk-off. Ironically that has shifted from the past.”

Supply and demand fundamentals are playing a critical role in the crude’s downward move. “Oil is going lower because there is more of it and there is more technology producing it. And gold is going higher — we are not making more,” McGlone noted.

The possible correlation between oil and gold could be observed on Wednesday, when oil prices tumbled in light of higher-than-expected crude inventories and gold prices advanced for the sixth day in a row, touching a fresh three-week high of $1,249 per ounce.

In response, crude futures for April delivery plunged, settling at $48.04 a barrel on the New York Mercantile Exchange, mainly driven by fears of U.S. oversupply.

A more well-known argument this week has been that gold is benefitting greatly from the political uncertainty in the U.S., including speculation over the reality of some of the President Trump’s campaign promises.

“Recent strength in gold prices is largely owing to reduced confidence in the ability of the Trump administration to push its promised corporate tax cuts through Congress any time soon,” Sarah Howcroft, economist at BMO Capital Markets, told Kitco News.

Gold continued to advance on Wednesday on top of the previous support it received during last week’s FOMC announcement, which “failed to live up to the market’s expectations for a more hawkish bias from the Fed,” the BMO economist added.

Howcroft disagreed with the argument that lower crude could be boosting higher gold prices.

“It would be a bit of a stretch to attribute the recent lift in gold to lower oil prices. From what we can tell, the latest drop in WTI is due to rising inventories in the U.S., which has reversed the boost from the OPEC agreement. These oil market developments have little bearing on gold prices,” she stated. “Historically, there has been a positive correlation between oil and gold prices. Nominally, higher oil prices lead to higher inflation, which then lifts demand (and prices) for gold, as an inflation hedge. However, the correlation seems to have weakened in recent years (post-2014 oil shock).”

Colin Cieszynski, Chief Market Strategist at CMC Markets, agreed that the fall in oil and rise in gold are not closely linked together.

“The recent weakness is being driven mainly by rising US inventories. One could suggest that higher inventories mean lower demand because reforms aren’t coming so quick, but that is a big stretch,” Cieszynski told Kitco News.

He further explained that the recent pick-up in gold prices comes from fading enthusiasm about the new Trump administration. “Traders see through the health care debate that the road to reform is a lot rockier than the street had been thinking. So a lower dollar and a return to a more normal political risk outlook for the US is boosting gold,” he said.