(Kitco News) - Europe continues to play an important role in the gold market as the region remains a significant source of investor demand, according to flow data from exchange-traded funds tracked by the World Gold Council. 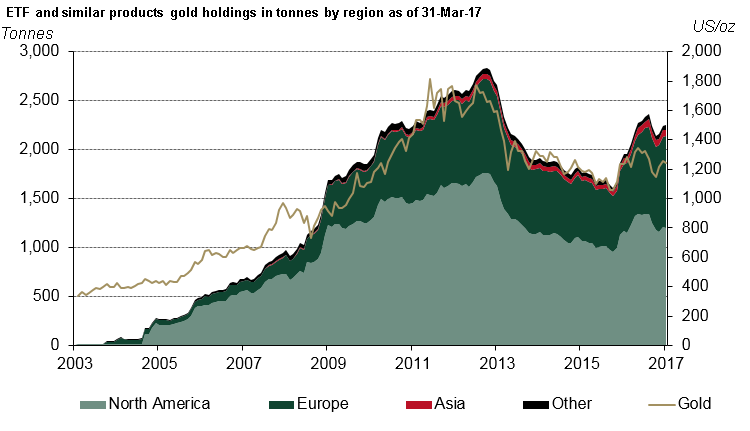 In a report Monday, the WGC noted that at the end of March, total holdings in gold-backed ETFs and similar products stood at 2,251.8 tonnes. According to the data, ETF gold reserves increased by more than 109 tonnes in the first quarter.

In a continuation of the trend seen in 2016, the data shows that Europe remains a significant source of ETF demand as European, including U.K., products saw reserves in March grow by 18.3 tonnes to 941.2 tonnes. At the same time, North American products shed 11.6 tonnes to 1,195.9 last month.

Solid European demand has helped add momentum to gold’s rally since the start of the year. Tuesday gold prices hit a five-month high with June gold futures settling the session at $1,274.70 an ounce, up 1.65% on the day.

Juan Carlos Artigas, director of investment research at the WGC, said that the latest data continues to support the view that Europe’s growing demand will be a long-term sustainable trend.

“We think there is still quite a bit of appetite still in Europe,” he said. “It’s not just money coming but investors are taking a strategic approach and see value in holding a core position in gold.”

European gold demand started to grow in 2016 ahead of the U.K. referendum on its membership within the European Union. Since the Brexit vote passed, demand has remained strong and has been reinforced by risk of growing popularity of nationalistic and euro-skeptic political parties in key countries like France and Germany. France will be holding its election later this month, while German citizens will head to the polls in September.

“Because of everything that has happened in Europe, investors are a little more sensitive to risk and see gold as an important diversification in their portfolio,” said Artigas.

Even if mainstream parties are able to maintain control of the political system in Europe, the views and rhetoric won’t quickly disappear, he noted, adding that a shift towards nationalism is permeating into the broader political landscape.

What’s more, Artigas said gold remains an attractive investment in a low interest rate environment. With European bond yields so low, gold has been an alternative for many investors, he said.