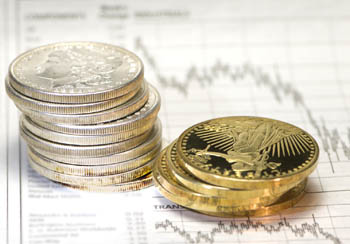 Spot metal was trading around $1,289.60 as of 11:23 a.m. EDT. Analysts pointed out that gold has rebounded some $150 an ounce from its low as of a Federal Reserve rate hike back in December. Further, they point out that for the second year in a row, a December Fed rate hike marked a low point for the gold price.

“Gold's resurgence has been supported by lower U.S. yields -- 10-year (is) 35 basis points below December peak -- and a marginally weaker USD (U.S. dollar), down 2.6%,” Credit Suisse said in a Tuesday research report. “The current environment still reflects higher real rates and a stronger USD than what existed pre-Trump, which suggests to us that recent gold strength has further to run as initial over-optimism continues to reverse.”

Credit Suisse analysts said they see U.S. real rates “continuing to surprise to the downside.” They say a Bloomberg consensus forecast has U.S. 10-year rates increasing 61 basis points to 2.85% by the fourth quarter. However, they point out that actual yields have come well below the one-year consensus estimate since 2011.

Meanwhile, Credit Suisse said a global glut of debt suggests dovish future monetary policy by central bankers. Central banks collectively hold a greater percentage of sovereign debt than ever before, and sensitivity towards disrupting markets means that they likely will be cautious in pursuing policies that could disrupt the current low rate environment supporting the economic recovery.

Analysts said they see room for gold investment demand to rebound some more after combined exchange-traded-fund and Comex positions declined from a peak of 97.6 million ounces on July 8, 2016 to a low of 66 million on Jan. 6. There has since been an 11.3 million rebound to 77.3 million ounces as of April 14 as investors bought back into the market on a more dovish Fed outlook, concerns about the willingness of  members of the U.S. Congress to work together, and geopolitical risks surfacing again, analysts said.

Credit Suisse said it maintains a bullish gold price outlook, looking for $1,400 gold in the fourth quarter, although the full-year outlook was trimmed to $1,323 from $1,338 previously to reflect prices in the first quarter.

Meanwhile, Credit Suisse hiked its 2017 silver-price forecast to $18.46 an ounce from $18.Analysts see $19 silver in the fourth quarter.