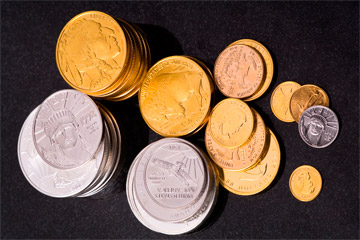 One lucky amateur gold hunter stumbled upon a 17th century gold coin while sifting through sunken items at the bottom of a river in Moscow, Russia.

The coin is said to be worth over $17,000, according to local media reports.

The impressive discovery was made when a diver was searching an area of the Yauza River, with a search magnet.

The diver was successful only because the coin was stuck to a metallic hinge, which was lying deep within the riverbed’s sand.

The 400-year-old coin turned out to be a gold ugorsky chervonets that was minted during the reign of the Russian Tsar Boris Godunov, who ruled between 1598 and 1605, the TV channel Moscow 360 reported, showing images of the coin.

The reason why this coin is considered so valuable is because it was never used as currency and was only given out as a reward for military achievements.

Such coins are very rare, with only six unearthed so far. Some believe this could push their value much higher than $17,000.

The diver who found the treasure is choosing to remain anonymous.

Media reports are speculating that the lucky discoverer is trying to avoid paying a heavy fine for either damaging the artifact during the raising process or conducting a treasure hunt without a proper permit in the first place, which is now required by the Russian legislation that was revamped and toughened just two years ago.