Gold 'Talked Down' By Many; Is It Time To Buy? - Marc Faber 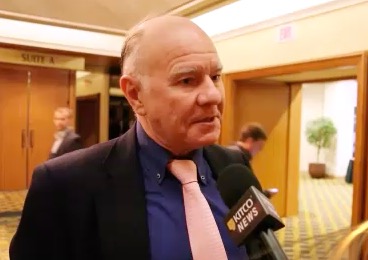 (Kitco News) - Ignore the recent weakness in gold, the metal is still trading higher this year as it did in 2016, points out one famed economist.

So why is it being “talked down” so much?

Marc Faber, editor and publisher of the Gloom, Boom & Doom Report, told Kitco News he doesn’t understand the negative outlook on gold as the metal has performed “reasonably” well, especially as a currency.

“We were up last year by around 9% and this year we’re still up 6-7% so it hasn’t been such a bad currency and this is against the U.S. dollar,” he said in a phone interview Thursday.

“My view is, of course, the [gold] price will eventually go up much higher. Around this level, it is an attractive opportunity to accumulate.”

And, to Faber, the current economic environment would warrant a 20-25% allocation in precious metals.

After nearly reaching $1,300 an ounce this summer, gold prices have fallen under pressure, trading earlier this week at a four-month low, as investors poured money into other assets like equities. August Comex gold futures last traded at $1,230.60 an ounce, 1% on the day. Meanwhile, U.S. stock markets continue to trade at record highs.

However, the famed newsletter writer – dubbed Dr. Doom for his often gloomy economic outlook – recently said he could even see a 40% correction in the stock market. He added that this could halt the Federal Reserve’s plans to reduce its balance sheet.

“We have inflated asset prices and if the asset inflation comes to an end and asset prices decline, I think it will hurt the system.”

Investors are also adding to the vulnerability of financial markets, he continued, noting that they are being too short-sighted.

“Nobody buys something because it might be good in 3 years’ time, people buy stocks because they hope that they will go up next week,” he explained.

Faber is also cynical on the U.S. dollar, calling it a “vulnerable” currency, which is another positive for the yellow metal.

“I don’t think anyone should be positive about the U.S. dollar in the long run,” he said. “I think it will go down against gold.”

To Faber, the Fed and foreign central banks need to stop “manipulating” markets.

“The fixing of interest rates is manipulation. If anyone in the private sector would try to fix interest rates, he would go to jail,” he said.

Adding to his pessimistic outlook, Faber said that the economic recovery is not on track as many analysts suggest.

“Recent economic statistics would suggest the global economy is actually weakening rather than strengthening.”

Specifically on the Fed, Faber noted that the U.S. central bank was off on its timing to begin tightening.

“I think the Fed should have actually never undertaken QE3 and in 2011-2012, increased interest rates but, they didn’t do it,” he said.

“The whole exercise that central banks have begun of accumulating assets on the balance sheet, it cannot end well. It will end in a disaster, we just don’t know when.”

What about Cryptos Doc?

“I would be reluctant to hold bitcoin and other cryptocurrencies, but I acknowledge that it was a mistake not to buy bitcoin after they had dropped to around $200-300,” Faber said.

As to regulating crypto markets, Faber said it’s only a matter of time before the government gets involved, especially if those markets explode.

“If they become big, it’s not ‘maybe,’ it’s ‘for sure’ the government will regulate them,” he said. “As soon as something becomes profitable in the U.S., it is subject to regulation and taxation.”

Brent holds above $100 in tussle between supply, recession fears