Too Big To Sell? World’s Biggest Diamond Could Be Cut Up 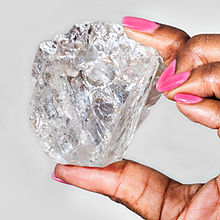 The 1,109-carat rock wonder is too big to be sold, which means it could be cut up in order to attract new interest, Reuters reported quoting industry experts.

“When is a diamond too big? I think we have found that when you go above 1,000 carats, it is too big - certainly from the aspect of analyzing the stones with the technology available,” said Panmure Gordon, mining analyst at Kieron Hodgson.

The 2.5- to 3-billion year old stone is the largest rough diamond discovered in over 100 years. The rock was named 'Lesedi La Rona', which means 'Our Light' in the national language of Botswana where it was mined.

The failure to sell it was not the outcome Lucara's chief executive William Lamb had expected for the precious stone.

“It's only the second stone recovered in the history of humanity over 1,000 carats. Why would you want to polish it?” Lamb questioned. “The stone in the rough form contains untold potential...As soon as you polish it into one solution, everything else is gone.”

Lucara’s plan was for rich collectors to get involved and purchase the massive diamond for a record-breaking price.

Large diamonds come with big risks, as turned out to be the case with Lucara, Lamb noted.

Even though the company doesn’t need to sell the stone right now, the diamond is “weigh[ing] heavily” on the stock, which dropped over 30% from late last year, Lamb said.

Following the failed public auction, the market knows the price people are willing to pay for it, according to Edahn Golan of Edahn Golan Diamond Research & Data. “Maybe it's worth waiting a couple of years,” he advised.

On a positive note, the Lesedi diamond turned into a lot of free advertisement for Lucara.

“Just from a publicity standpoint, nobody knew what Lucara Diamond was when they recovered that stone ... now they're probably one of the most recognized names,” independent diamond analyst Paul Zimnisky said.

Lamb said he doubts that they will be able to sell the diamond for the asking price, while adding that polishing the stone would be too much of a risk.

One idea being considered is a cooperation with one or more partners to cut the stone and sell it. “We've already done our homework,” Lamb said. “You don't take a stone like this and give it to the second best.”

Some of the possible partners could include British diamond dealer Laurence Graff, according to media reports.

Another reason to send the diamond to the cutting board is that Lucara might not win by holding onto the stone.

“Maybe next week, there will be a larger stone,” said Oded Mansori, Rare Diamond House (RDH) managing director, adding that there are new mining technologies that help companies unearth larger and more impressive stones these days.

“Miners have more advanced technology, this is why we see these large stones coming up all of a sudden,” the Belgium-based expert said. “I think that Mother Nature has some more surprises waiting for us.”

Euro falls to lowest since 2002 on concerns over energy prices