Everyone Shuns The Dollar; What Does It Mean For Gold?

(Kitco News) - Traders haven’t been this bearish on the U.S. dollar in more than three years, as highlighted by one Melbourne-based bank and the latest data by the U.S. Commodity Futures Trading Commission.

What could this mean for gold?

On Friday, gold prices came within striking distance of $1,300 an ounce but have since retreated. However, Hynes said he could see the metal breaching that level “fairly soon.”

"If you look over the medium to longer term we think gold will continue to appreciate. And certainly, our medium term target is for $US1400 an ounce. We're talking two to three years, or the end of the decade," he said on Friday.

Gold prices have cooled off from last week’s rally, with December Comex futures last trading at $1,290.40 an ounce, down 0.28% on the day.

The bank’s Forex team also recently highlighted how positioning in the U.S. dollar has not been this bearish in years. With gold typically trading inversely to the greenback, this could mean more good news for the metal, unless the dollar’s extreme bearish sentiment reverses. 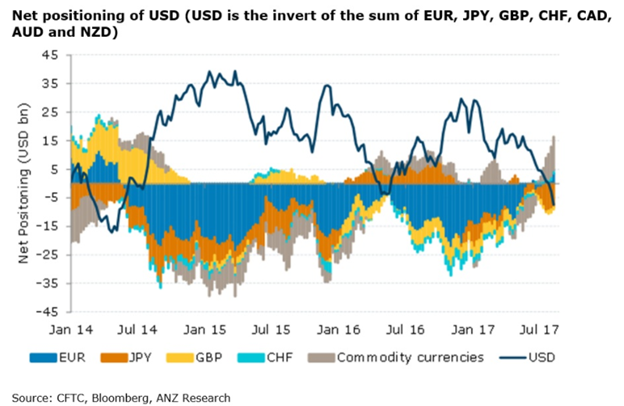 As highlighted by the blue line on ANZ’s chart, non-commercial net positioning in the DXY went from net long of around $30 billion at the start of the year to net short of $7.4 billion last week.

ANZ looked at non-commercial speculative positions for their dollar analysis, by summing up longs and short options and futures; the data, which is showing a net short position, is hinting that traders are looking for a weaker greenback.

As highlighted by ANZ’s analysts, traders haven’t been this pessimistic on the dollar since May 2014.

“US dollar selling in the week was broad based, with the most against the EUR,” said the bank’s currency strategists Irene Cheung and Rini Sen in a report Monday.

“Funds added $US2.3 billion to take their net long EUR position to $US3.6 billion, the second consecutive week of net buying and the biggest long position since May 2014.”

Meanwhile, the latest CFTC data showed that bullish sentiment in gold has risen for the fourth consecutive week.

Could it be time for a reversal?

Maybe not, with Hynes noting that “the sky’s the limit” when it comes to gold’s price.

“[G]old isn't anchored by some of the traditional fundamentals that a lot of the other commodity markets are, ie. around industry cost structures and the like,” he explained.

“But also, because consumption of gold occurs in a different dynamic. Essentially, every single ounce of gold ever produced is still in circulation."