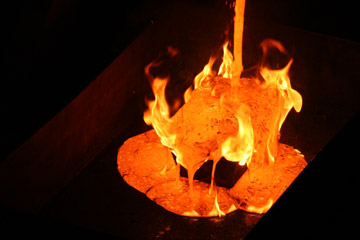 (Kitco News) - Gold mining output dropped “dramatically” this year, which has greatly benefited the yellow metal’s prices. And according to an analyst at Melbourne-based bank ANZ, this trend is likely to continue.

“Growth in mine output is at its lowest point since the financial crisis, with risks of only getting greater,” ANZ's senior commodity strategist, Daniel Hynes, said in a note Thursday.

Gold output has plunged 2% during the period of January-May when compared to last year, Hynes cited data from the World Bureau of Metal Statistics. For the month of May alone, gold production dropped 3.1% from a year ago.

Hynes explained that the main reasons for the downfall are changing government policies in gold producing countries, which are hurting the supply side.

For example, in Indonesia, the introduction of new mining and export permits are threatening the future of Freeport’s Grasberg mine, which is responsible for producing around 2% of global gold mine output.

Also, South Africa has amended its mining charter, which could have consequences for the miners when it comes to ownership.

The future of gold supply outlook also remains bleak, Hynes continued, which could be good news for gold prices next year as well.

“With investment conditions remaining subdued, it's unlikely we will see any rebound in mine supply in the foreseeable future,” he said.

On the other hand, demand for gold continues to grow, the analyst pointed out.

Total bar and coin demand was up 13% in Q2 of 2017, largely driven by a Chinese demand and a recovery in India, the World Gold Council (WGC) said in its most recent Gold Demand Trends report. Also, demand from jewelry and technology sectors was very strong, up 8% and 2% respectively, the report added.

During the last couple of weeks, gold prices have been rallying very close to the $1,300 level on geopolitical tensions between the U.S. and North Korea, with gold bulls remaining optimistic of breaching that level soon.

“If you look over the medium to longer term we think gold will continue to appreciate. And certainly, our medium term target is for $US1,400 an ounce. We're talking two to three years, or the end of the decade,” he said last week.

When it comes to forecasting future gold prices, Hynes added that “the sky’s the limit.”

“Gold isn't anchored by some of the traditional fundamentals that a lot of the other commodity markets are, ie. around industry cost structures and the like,” he explained. “But also, because consumption of gold occurs in a different dynamic. Essentially, every single ounce of gold ever produced is still in circulation.”