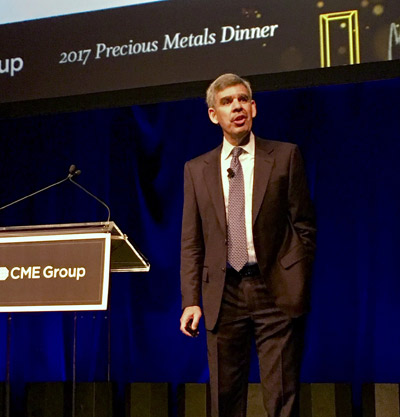 (Kitco News) - The rise of bitcoin, mostly during times of duress, has some investors questioning whether the virtual currency is taking away from gold’s safe-haven allure.

“If you're in gold, you've had a good year up about 15%, but not really as good as you should have had given the geopolitics,” he added.

The rise in popularity of cryptocurrencies like bitcoin have recently held back gold's gains as investors flocked to the new asset class during times of heightened tensions.

“It's not a substitute to gold but don't underestimate when a small loyal customer base falls in love with another asset class.”

However, the longtime investor is not bullish on bitcoin, recently speaking out on the virtual currency's price.

El-Erian's main message at the CME event was simple: once Bitcoin cools off, gold prices should benefit.

“When cryptocurrencies hit a pothole part of the reaction will be to go back to gold,” he said. “But until that happens, gold will be affected."