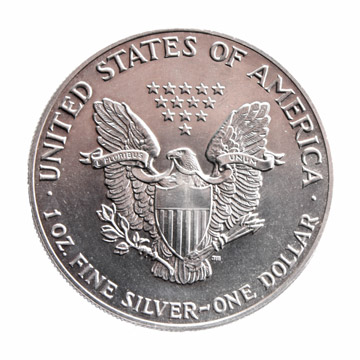 (Kitco News) - Sales of American Eagle silver coins plunged to 10-year lows during the third quarter, according to the recent data released by the U.S. Mint.

Silver coin sales were almost at 3.7 million ounces last quarter, which marked the lowest quarterly numbers since 2007, the U.S. Mint said on Friday.

“Typically, silver coin sales drop when prices are dropping,” Edward Meir, independent commodity consultant FCM Division of INTL FCStone, told Kitco News. “Silver has not been doing much of anything during the last few weeks. It is possible that sales have been hurt.”

Silver prices dropped by almost $2 an ounce during the course of September. December Comex silver was last seen trading at $16.67, down 0.07% on the day.

But, silver prices have rebounded from July’s low of $15.24 and continue to trade above that level.

Also, Meir pointed out that other assets may be taking away from silver’s allure. “There is a finite amount of the money. Some of it might be going into gold and other ETFs. Bitcoin is taking money away and palladium ETFs have been hot recently,” he said.

Aside from silver sales, the U.S. Mint said that American Eagle gold coin sales were at 38,500 ounces in Q3, up 45% from the previous quarter, but 80% lower than a year ago.

A drop in gold coin sales coincided with a surge in yellow metal’s prices in Q3, which saw December Comex gold briefly trading above $1,360 an ounce.

In addition, the sale of the American Eagle palladium coins, which the U.S. Mint introduced for the first time in September, was at 15,000 ounces.