Gold Prices Went Crazy Along With Stocks On Black Monday

(Kitco News) - Stocks were not the only market that went berserk on Black Monday 30 years ago; so did gold and other commodities.

If there’s a lesson to be learned for gold traders – yes, the metal is a safe haven, but sometimes it also acts as an ATM machine as investors make withdrawals to raise money. After initially soaring on Black Monday, gold then fell for the rest of the day and the next as investors sold whatever assets they could to generate cash.

Black Monday, which occurred on Oct. 19, 1987, has been described by news outlets as the worst day for equities in U.S. history. The Dow Jones Industrial Average fell 22.6%, or 508 points, in one day. This would be comparable to a 5,237-point decline from Wednesday’s close.

“It was hectic and chaotic,” he recalled. “It was sort of nerve-wracking because up until then, 100 points down (in the Dow) was a huge move that would take weeks. We weren’t used to a move like that.” 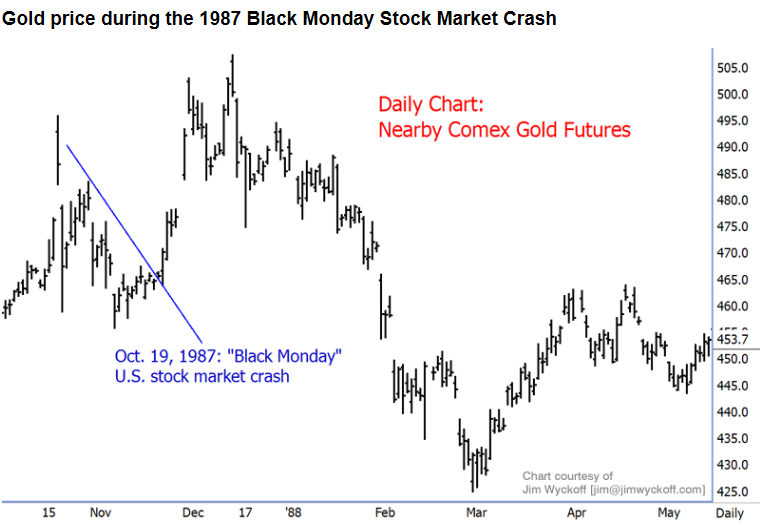 Jim Wyckoff, senior technical analyst with Kitco News, was a copy editor for a real-time commodity newswire at the time. The craziness wasn’t just in stocks and gold but all commodities, he said. Back then, reporters on the exchange floors called into the office to dictate stories on market moves, rather than using laptops. He remembers the reporters and copy desk being overwhelmed.

“It was the wildest day of my professional career, hands down,” Wyckoff said.

“People were busy liquidating to raise cash,” Gero said. “They were liquidating anything, including gold.”

Wyckoff added that “people wanted to get out of any market” they could in “panic liquidation.” Eventually, however, gold did take off, getting up to $502.30 in December 1987, Wyckoff pointed out.

Gero commented there have been other instances in which gold behaved similarly, such as the time around when Lehman Brothers failed and the Great Financial Crisis began in 2008.

“Normally what happens is people liquidate anything that is liquid when they have to raise cash,” Gero said. “They’re not thinking of buying anything for a hedge until afterwards.”

Having said that, however, Gero said he also suspects investors might turn to gold as a hedge more quickly now than they did in 1987. He added that if a similar stock-market sell-off were to occur again, there are a number of factors now that could exacerbate the situation, such as algorithm trading and the end of daily price limits in many futures markets. When those price limits – both up and down -- were hit in the past, markets were shut down for a certain number of minutes to allow adjustments in margin calls and for market participants to recover, Geri explained.

There is one condition in place today that was comparable to autumn of 1987 – stocks have hit record highs. Could it happen again?