Fake Gold Bar Did Not Come From RCM

(Kitco News) - The Royal Canadian Mint has described the sale of a counterfeit one-ounce bar as an isolated incident, but bullion dealers say the problem is more widespread than officials want to believe. 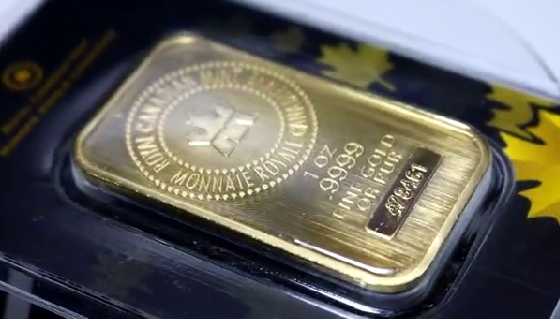 The issue of counterfeit bullion products made international headlines earlier this week when a fake one-ounce bar was sold to an Ottawa-based jeweller by Royal Bank of Canada.

While the gold bar was stamped with the Canadian Mint’s insignia in sealed packaging, the mint in a statement Tuesday said that it was not one of its products.

“The Mint did not manufacture, ship or sell the [gold bar],” the mint said. “RBC has confirmed that the bar it sold to its customer did not come from the Royal Canadian Mint and it continues to investigate the matter with our support.”

The Mint added counterfeiting of its bullion products is “extremely rare.”

However, some bullion market associates are warning that the mint’s comments understate a prevalent problem.

Counterfeiting Is A Multi-Million Dollar Business

According to the Professional Numismatists Guild (PNG) in a recent posting, there has been an increase in fake bullion products. The PNG said it is a multi-million dollar business.

“Nothing is immune to counterfeiting” he said. However, he added that products in certified mint packaging are usually reliable products.

While the Royal Canadian Mint is dealing with the fallout of counterfeiting, it is not alone; this is an international problem.

Members of the U.S. Congress are also trying to raise the awareness of fake gold bullion. Last week, Alex Mooney (R-WV) and Frank Lucas (R-OK) sent a letter and fake one-ounce American Eagle gold coin to the Department of Homeland Security, asking why they haven’t been investigating fake coins coming into the U.S.

“We are sending it to you because it's our understanding that the Department of Homeland Security's U.S. Secret Service was not inclined to investigate the origin of this and a related batch of these counterfeit Gold American Eagle coins when the matter was recently brought to its attention,” the two wrote in their letter.

For consumers who are concerned about the purity of bullion products, Spiegel said the first rule to follow is buy coins and bars from reputable dealers. He noted that NGC guarantees the purity of all its certified products. He added that consumers, when looking at buying coins and bars, need to have some healthy skepticism.

“If you see something too good to be true then it probably is,” he said. “You need to be careful of people who are selling a coin below its supposed melt value. Nobody would really sell a coin that is below what the actual metal is worth.”

Peter Hug, director of global trading at Kitco Metals said that the reason consumers can trust reputable dealers is because they have the technology and processes in place to make sure all bullion products are genuine.

“The instance noted is probably caused by the insufficient training or protocol at the bank’s branch level, where a customer sold a fake bar, which would have been easily caught in a normal non-destructive testing protocol. The bar was then added to inventory and sold in good faith to the jeweler,” he said.

“A reputable dealer will generally have two protocols. Customers will have the option of ordering product that has not been circulated: Kitco offers MintFirst products for example whereby the coins/bars are available in Mint strapped sealed boxes or sealed tubes and capsules,” he added.

“Products that are held in segregated storage accounts, which generally carry modest annual fees, also keeps the items in “a chain of integrity” and the dealer will generally pay a higher premium on re-sale. For circulated product, a dealer should have state of the art testing protocols on purchases from the secondary market and although some dealers melt all incoming product, re-sale of circulated product is generally tracked and guaranteed by the selling dealer.”