(Kitco News) - Gold prices have been stuck in a trading range that one analyst says is the narrowest in 12 years, which would indicate upside potential for the metal.

April 2005 was the last time the gold market was this compressed, from a technical analysis perspective, pointed out Mike McGlone, commodities strategist for Bloomberg Intelligence, in an email to Kitco News Wednesday.

This could be good news for gold as he added: "The year-end price was 20% higher.” 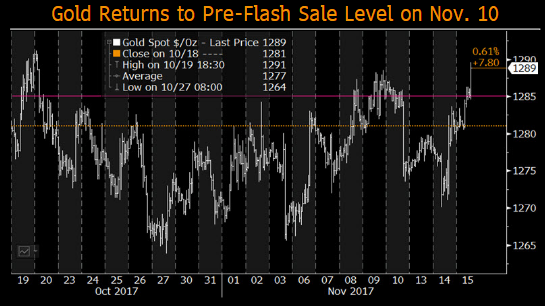 However, McGlone is a little more optimistic, calling for the U.S. dollar’s 2017 downtrend to continue into 2018 and volatility to pick up in stock markets – both positives for the gold market.

“If gold holds above $1,285 an ounce, it would be an indication of breaking out higher from its extremely tight range,” he said. “Sustaining above this level would indicate a failed sale attempt. Indicating a coiled market that's ripe to spring, the gold 20-day Bollinger Band width at 1.7% is the narrowest in 12 years.”

“Pressured by an expected Fed rate hike in December and recent dollar recovery, gold may be set to resume the 2017 trend higher,” McGlone wrote.

“If the dollar continues to decline in 2018 and stock market volatility increases some, $1,400 resistance should come into play.”

The gold price has risen heading into the European open