(Kitco News) - Researchers in northeastern France have announced the discovery of an “exceptional” treasure trove, with more than 2,200 medieval gold and silver coins. 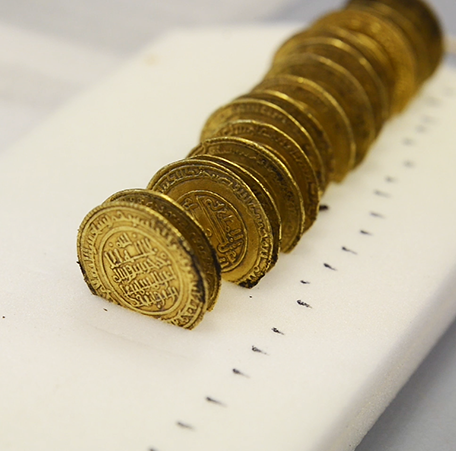 According to reports, the gold and silver hoard was discovered when archaeologists were digging in an area next to the former Benedictine monastery Cluny Abbey. The treasure was first unearthed two months ago and announced earlier this week after the coins and other artifacts were catalogued.

"It's an exceptional and extremely rare treasure," said Anne Flammin from France's National Centre for Scientific Research (CNRS), in a statement Tuesday. “With so many coins, all minted in the first half of the 12th century, this cache constitutes an exceedingly rare find for medieval Europe.”

Along with more than 2,200 silver coins, the researchers discovered 21 gold dinars, a gold signet ring with a Roman intaglio, a folded piece of gold leaf, and a small gold object.

“Despite the number and value of the coins, the most precious item in the treasure remains the signet ring. While the object itself was probably made in the 12th century, its inset, a small intaglio portrait of a god, dates back to the Roman Empire,” the CNRS said. 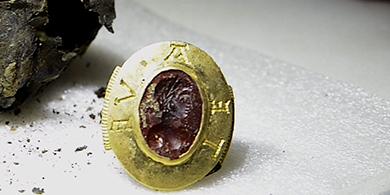 Speculating on how the coins ended up in that part of the monastery Flammin said: “Perhaps a member of the order wanted to bury his nest egg. The location of the discovery could also link it to the purser, the monk who handled the monastery’s food budget.”

According to the CNRS, Cluny had the most extensive network of monasteries ever formed in the Middle Ages; however, only one wing of the monetary has survived through time. The archaeologists’ original goal was to find traces of the old buildings.

As to the value of the hoard, the CNRS said that it represented “a considerable sum for an individual,” but was not a massive store of wealth. The entire trove would have been worth a week’s supply of food and drink for the entire Abby.