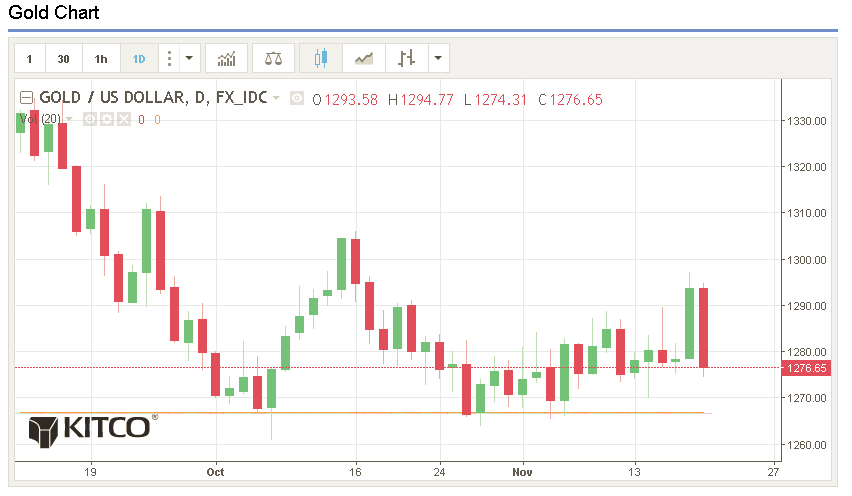 (Kitco News) - The gold market hit a brick wall Monday as strong selling pressure pushed it back into a narrow month-long trading channel.

Not only did the gold market give up all of its gains from Friday, which saw prices hit a four-week high, but Monday’s price action was the biggest selloff in two months. December gold futures settled the session at $1,275.30 an ounce, down more than 1.5% on the day.

According to some analysts, the lack of follow-through buying and sharp rejection of the $1,300 level could lead to lower prices in the near-term.

“If you are a gold bull, this is very concerning,” said Bill Baruch, president of Blue Line Futures.

Baruch added that because of Monday’s price action he has shifted his stance on gold to neutral from his previous bullish near-term outlook. As a result of gold’s latest technical rejection, he said that investors need to keep an eye on near-term support at $1,267 an ounce.

Baruch noted that he is also watching the 200-day moving average as near-term support.

“If we get below the 200-day moving average and break that trend line at $1,267 we will see continued weakness,” he said. “The bears are in firm control right now.”

Darrin Newsom, senior analyst at DTN, said that he is also now expecting to see lower prices in the near-term, as it appears that the market “just wants to go down.”

Newsom added that he is not surprised prices weren’t able to break above $1,300 an ounce as that is an important retracement level of the September selloff after the market hit a one-year high. Prices have to go lower before they can go higher he said.

“We haven’t finished off a secondary selloff on the weekly chart,” he said. “We couldn’t get above $1,300 and that indicates that this market wants to finish off its secondary downtrend at $1,243.”

Newsom said that a break below $1,271 would signal a push to his key support target.

Colin Cieszynski, vice president of the Canadian Society of Technical Analysts, said that while gold’s lack of follow through from Friday’s breakout is disappointing, the reality is that the market is just stuck.