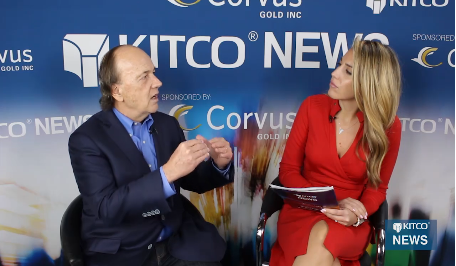 (Kitco News) - The Federal Reserve could provide the ammo that blasts gold into its next major rally – a rally that could push prices up as high as $10,000 an ounce, according to one famed investor.

On the sidelines of the Silver and Gold Summit in San Francisco, best-selling author Jim Rickards told Kitco News that he is not convinced the Fed will raise rates next month at its monetary policy meeting, despite markets pricing in a nearly 100% chance.

The reason for his contrarian view is based on inflation, which will be in the spotlight this week with Thursday’s release of the October core Personal Consumption Expenditures (PCE) Index. Core PCE is the central bank’s preferred inflation measure as it strips out volatile energy and food prices.

“The Fed has a dual mandate: job creation and price stability. Job creation was mission accomplished a long time ago; that is not even a concern. Disinflation is a real concern,” he said. “PCE core has gone down to flat nine months in a row from 1.9% to 1.3%, moving away from the Fed’s target.”

Rickards said that he expects the report to show PCE annual inflation growth of 1.3% or lower, adding that if this happens, there is no way the central bank will raise rates at its December meeting.

Because expectations are so high for a rate hike, Rickards said markets will take a “180-degree turn” if the Fed doesn’t pull the trigger, which will drive gold prices higher.

“With core inflation readings continuing to surprise on the downside, however, many participants observed that there was some likelihood that inflation might remain below 2 percent for longer than they currently expected,” the central bank said in the minutes. “A few other participants thought that additional policy firming should be deferred until incoming information confirmed that inflation was clearly on a path toward the Committee’s symmetric 2 percent objective. A few participants cautioned that further increases in the target range for the federal funds rate while inflation remained persistently below 2 percent could unduly depress inflation expectations.”

For Rickards, gold’s struggle around $1,300 an ounce is a minor resistance point in what he sees as a much larger rally. In his latest interview, he maintained his view that gold prices could reach $10,000 an ounce.

“It’s not a made-up number; I don’t do it to get headlines,” he said. “It is the price gold would have to be to avoid deflation.”

Rickards is the New York Times best-selling author of Currency Wars: The Making of the Next Global Crisis, The Death of Money: The Coming Collapse of the International Monetary System, The New Case for Gold, and The Road to Ruin: The Global Elites' Secret Plan for the Next Financial Crisis.