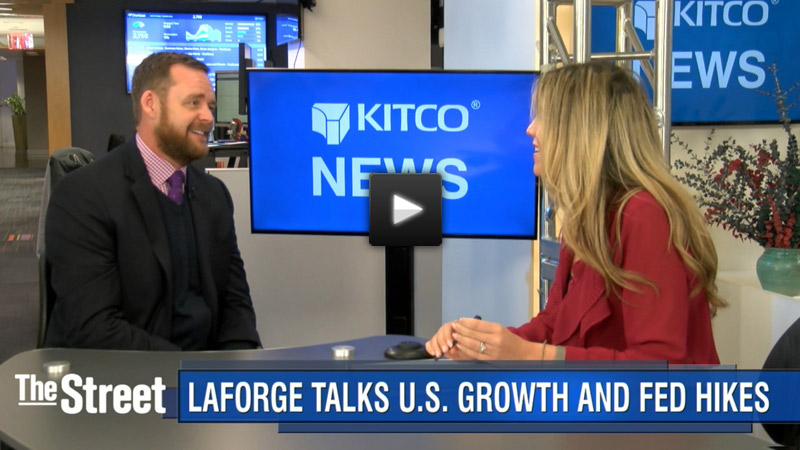 (Kitco News) - Gold investors might not see a sustained rally for a long time as the metal is far from being out of the woods and may potentially retest lows of $1,050 an ounce, according to John LaForge, head of real asset strategy for Wells Fargo.

“On a secular basis, commodities go through periods of 20-year bear markets on average – we get stuck in the year-to-year but the history of commodity super cycles is we still have some time to work off supply – in the case of gold, you are looking at lots of supply,” said LaForge, listing one of the fundamental reasons the price may remain under pressure.

LaForge does not subscribe to the theory of peak gold and says that any rallies the metal saw this year were short-lived occurrences.

“What happens in these longer-term secular bear markets is you do get multiple rallies. If you look at the ‘80s and ‘90s, gold was stuck in a range roughly between $250-$400 an ounce. That’s the bear market; it bounces back and forth,” he said in an interview with Kitco News on Tuesday.

“The history of commodity bear super cycles suggests that gold should retest the lows seen in December 2015 of around $1,050 per ounce,” he said.

Although LaForge doubts that gold will fall quickly from today’s level of $1,267 an ounce, he does see the metal making its way lower in the new year. The bank released its gold outlook for 2018 on Wednesday, and LaForge sees the new year being very much a repeat of 2017.

“Our year-end outlook 2018 target range for gold is $1,150-$1,250 per ounce, the same as in 2017. We believe that gold’s 2017 rally will start to fade as we begin 2018, but there is always the chance that geopolitical risks worldwide could keep gold prices higher for longer,” LaForge said.

As for whether the bitcoin hype has taken a chunk out of gold, LaForge said, “maybe a little,” but not as much as other experts are suggesting.  “I don’t see a currency that is up 1,000% percent as a currency. I don’t think bitcoin can be defined as a currency that can take flow away from gold.  The biggest victim here is silver – silver is the one that is often taken as the beta play on gold and maybe bitcoin is stealing the thunder away here.”