Bitcoin’s parabolic rise since its inception has seemingly defied and ignored all external fundamental influences; projecting prices therefore requires looking at the cryptocurrency in a different way, and in this case, treating its historical price patterns as a purely mathematical model.

On close examination of Bitcoin’s price history, we can see that it follows a nearly perfect parabolic curve. In particular, its price profile has thus far been nearly identical to the Fibonacci Sequence (Chart 1). 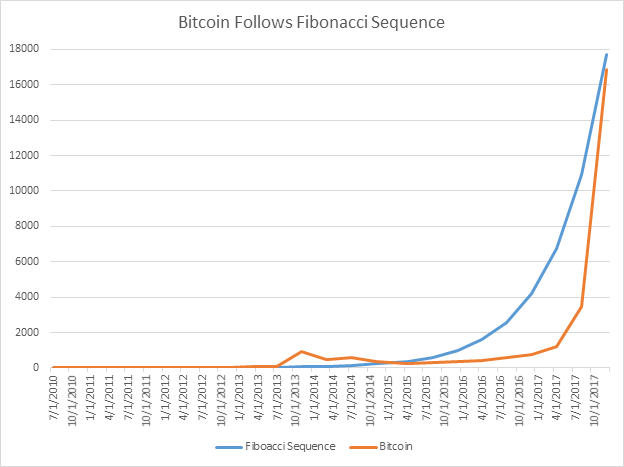 Bitcoin Prices Have Been Driven By Number Sequences

In layman terms, the Fibonacci Sequence is a series of numbers in which a number is derived by adding the previous two numbers before it in the sequence. For example, starting with 0, the sequence goes 0, 1, 1, 2, 3, 5, 8, and so on. The sequence can be found in all corners of nature, from leaf arrangements in plants to the spiral shape of hurricanes.

The chart above shows that current Bitcoin prices ($16,851) correspond most closely with the 22nd number of the Fibonacci Sequence (17,711). Subsequently, dividing Bitcoin prices from 2010 to present into 22 equal parts, or every four months, produces a good price profile alignment with the sequence (0-22).

If we were to consider that Bitcoin’s price pattern has so far correlated with a purely mathematical formula, then we can assume that it is an unique asset class, devoid of any fundamental influences, and any price forecasts in the near to mid-term future should be purely technical.

Chart 2, below, shows Bitcoin and the Fibonacci Sequence plotted together, in log scale. In this view we notice two significant patterns: 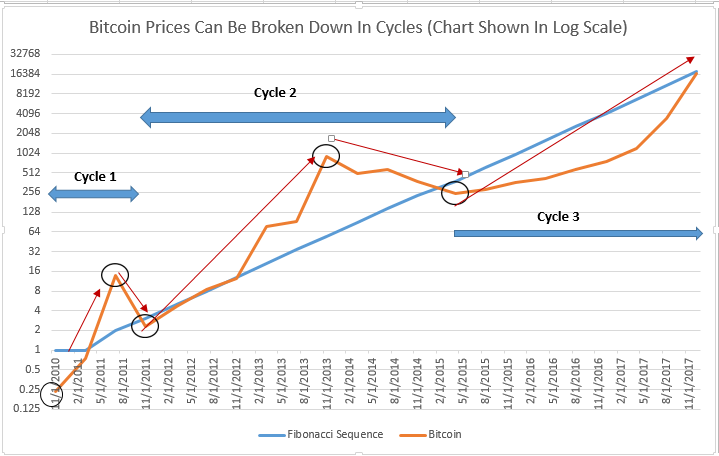 Because the oscillation around the blue trend line has been relatively consistent since 2010, we will, for the purpose of this exercise, consider the Fibonacci Sequence as Bitcoin’s “fair value.” Any subsequent price movement around the trend line could then be considered deviations from fair value.

Bitcoin has undergone two complete price cycles in its lifespan, with a complete cycle defined as a price trough moving to a price peak, and back to a trough again. Cycle peaks and troughs are shown in circles in Chart 2.

We are currently still in the bull phase, or the first half of the third cycle, with prices projected to move much higher than the current fair value of $17,711. By averaging the percentage gains of the last two cycles, from the fair value of the beginning of the cycle to Bitcoin’s price at the peak of the bull period, we are able to estimate the amount Bitcoin still has to grow in its current cycle. The Table below summarizes these findings.

The model predicts that prices in Bitcoin’s current cycle will peak at around $58,000 before the cycle turns bearish and prices revert back to below fair value. This of course, ignores all fundamental and macroeconomic influences. The model is only valid until the end of the current cycle, since with more regulation underway, and the nature of cryptocurrency investing evolving rapidly, it would seem illogical to assume that Bitcoin’s price pattern will continue moving upwards parabolically and indefinitely follow the Fibonacci Sequence.

This analysis comes as Bitcoin futures began trading on its first regulated futures exchange, through the Cboe Options Exchange on Sunday night. This marks the first time investors could get exposure to the largest cryptocurrency via a mainstream regulated exchange. Early trading of Bitcoin saw the clearing house issue several restrictions, such as no short selling and 50% margins. Bitcoin is up 13% on Monday after an initial surge of 22% Sunday night.

David Lin is the Associate Producer for Kitco News. He graduated from McGill University with a Bachelor of Commerce, majoring in Finance.