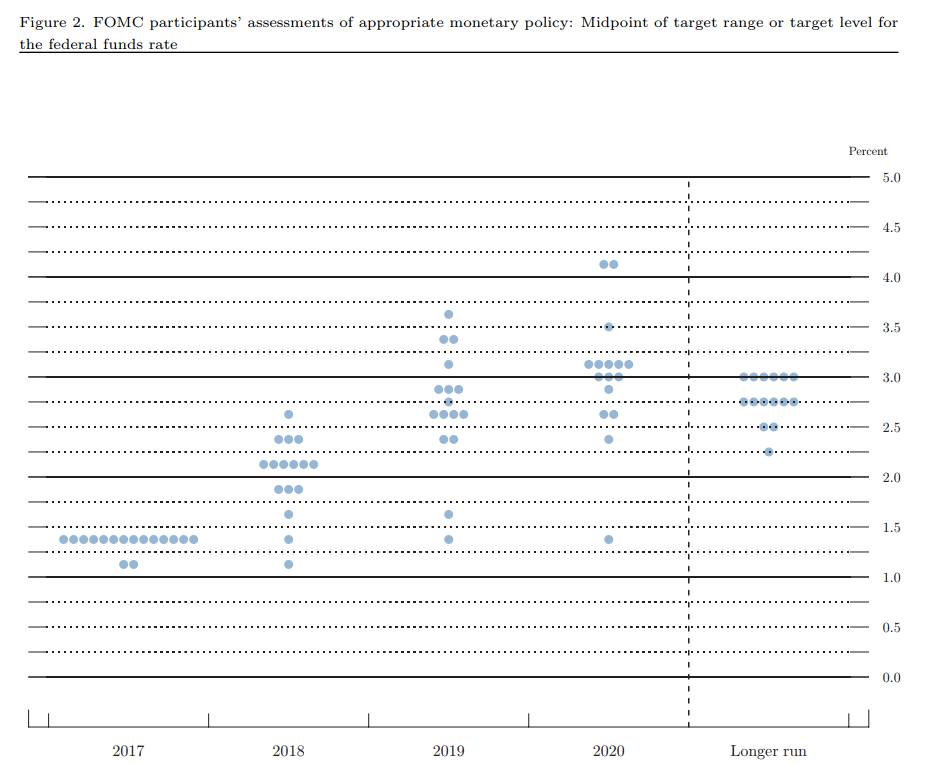 As widely expected, the U.S. central bank raised interest rates by 25 basis points, pushing the federal funds rate to a range between 1.25% and 1.50%. The central bank continues to look past persistent weak inflation pressures as it expects to raise interest rates three times next year.

The biggest highlight from the central bank is that it sees the U.S. economy growing by 2.5% next year, up significantly from the previous estimate of 2.1%

Gold prices were trading near session highs ahead of the monetary policy decision and are holding relatively steady. February gold futures last traded at $1,248.50 an ounce, up 0.56% on the day.

“Inflation on a 12-month basis is expected to remain somewhat below 2% in the near term but to stabilize around the Committee’s 2% objective over the medium term,” the central bank said in its monetary policy statement. “Near-term risks to the economic outlook appear roughly balanced, but the Committee is monitoring inflation developments closely.”

While the central bank is holding firm with its forecast of three rate hikes next year, some economists say that it could be a little too optimistic. Avery Shenfeld, senior economist at CIBC World Markets, said that they still see the central bank hike rates only twice next year.

“The "dot" forecasts were unchanged except for adding an extra hike in 2020, and still call for 3 quarter point hikes in 2018. We have doubts on that score, seeing both core PCE and growth below the Fed's trajectory, and therefore expecting a pause in Q1, and only 2 hikes in 2018 overall. We'll see,” he said.

The following is a recap of the Federal Reserve’s economic projections.

The committee sees a relatively stable labor market for the next few years, hovering around 3.9% next year and in 2019, down from 4.1% in September’s forecast. The unemployment rate is expected to hit 4.0% in 2020, down from the previous estimate of 4.2%.

Despite persistently weak inflation pressures throughout the past year, the U.S. central bank continues to expect prices pressures to continue to build. The projections show inflation rising 1.9% next year and then consistently accelerating by 2% in 2019 and 2020.

Core inflation expectations, which strip out volatile food and energy prices, are expected to push to 1.9% next year and then hover at the 2% inflation target by 2019 and 2020.
By Neils Christensen