Consumeristic society was to blame for such wastefulness, according to the joint study released by the U.N. University (UNU), the International Telecommunication Union, and the International Solid Waste Association.

“There has been much debate and criticism of the growing ‘throwaway society’, characterized by consumerism and the trend to throw away and buy something new rather than keep and repair,” said the U.N.-backed report titled ‘The Global E-waste Monitor 2017’.

Electronic waste was at a record 45 million metric tons worldwide in 2016. “This is equivalent of almost 4,500 Eiffel towers.”

The report defined e-waste as anything that has a plug or a battery.

The recycling potential is staggering here, with $22.2 billion worth of gold — 500 metric tons — simply thrown away on a global scale, the report pointed out. There is a similar story with silver, as 1,600 metric tons get discarded, totaling around $1 billion. 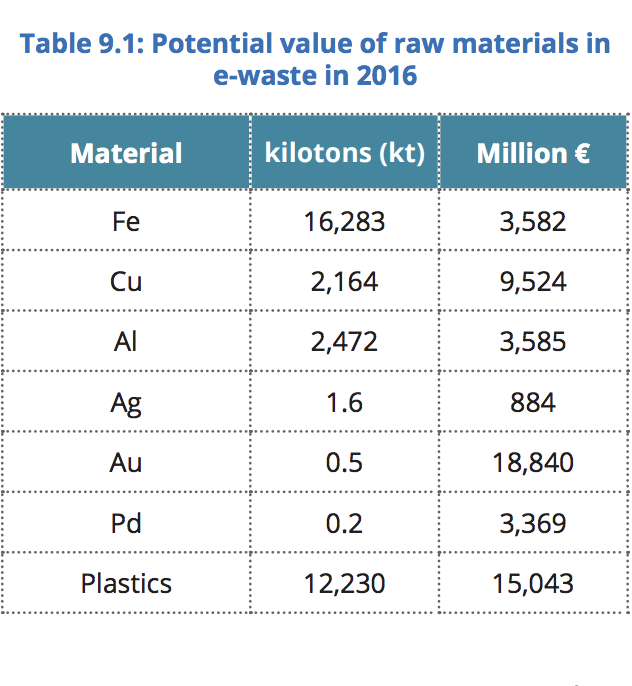 “The total value of all raw materials present in e-waste is estimated at approximately 55 billion euros [USD $65 billion] in 2016, which is more than the 2016 Gross Domestic Product of most countries in the world,” stated the study, which was published on Wednesday.

According to the latest statistics, only 20% of global e-waste is properly collected and recycled. The rest ends up with regular household garbage in landfills.

On top of that, electronic waste is estimated to only grow from here, with the report projecting an increase to 52.2 million metric tons in 2021.

China is currently in the top spot in terms of the e-waste generation. “China plays a key role in the global EEE industry for several reasons; it is the most populous country in the world, so the demand of EEE is very high, and it has a strong EEE manufacturing industry,” the report stated.

The reasons for throwing away old technology were either associated with the hassle of repairing the device or a social status connected with purchasing a newly upgraded version, the report explained.