Gold Beats Bitcoin As The Preferred Asset In 2018: ETF Securities 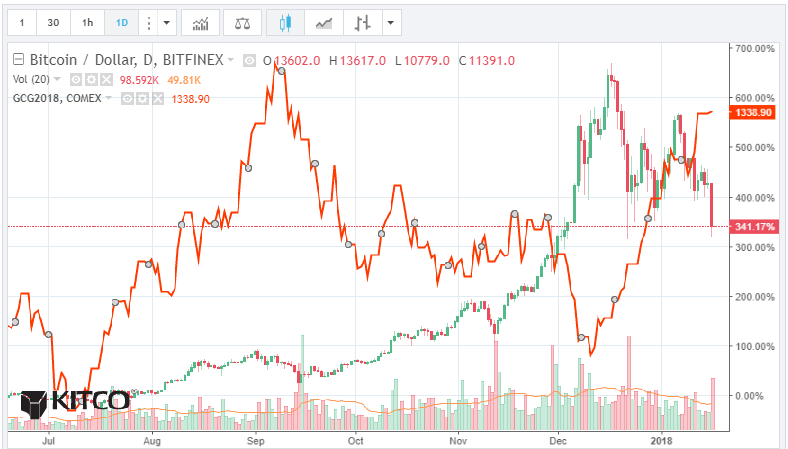 (Kitco News) - Unlike for gold, it has not been a good start to the year for crypto currencies, especially for bitcoin, which lost significant traction as prices trade around $11,000 an ounce.

Tuesday has been a particularly disappointing day for bitcoin investors, as the digital currency has dropped almost 20% during the trading session. Kitco.com’s aggregated markets show bitcoin last traded at $11,400 a token. Bitcoin is down 42% from its record highs of above $19,000 seen just one month ago.

By comparison, the gold market is one of the best performing assets at the start of the new year, holding near a four-month high. February gold futures settled Tuesday’s session at $1,337.10 an ounce, up 8% since its lows seen last month.

Maxwell Gold, director of investment strategy at ETF Securities, said in a recent research note that he continues to prefer gold over cryptocurrencies. He noted that bitcoin’s volatility is one of the key reasons why it will won’t usurps gold’s role as a safe-haven asset and long-term store of value.

Gold added that he also prefers the precious metal over bitcoin because the latter has been driven by risky speculative behavior. He noted that bitcoin’s gains have been driven by sentiment, which in the long-run is proving to be unsustainable.

While sentiment is also a critical component in the gold market, he pointed out that the market is still more diverse than that of digital currencies.

“Assume the world decided overnight that gold has no intrinsic monetary value. The next day there would still exist a demand for the physical metal for adornment as well as industrial and scientific endeavors. This would not be the case, however, for bitcoin whose only utility stems from the acceptance and use in transactions – a role still unachieved as of today,” he said in the report.

Ultimately, despite bitcoin’s allure, Gold said that investors will continue to favor precious metals as a diversification tool in an environment of overstretched equity markets.

“Gold provides diversification through its historically low correlations with most asset classes, particularly equities. In this capacity, gold has exhibited an average return of +7% compared to a -21% average return in the S&P 500 during market drawdowns of 10% or more since 1987,” he said.