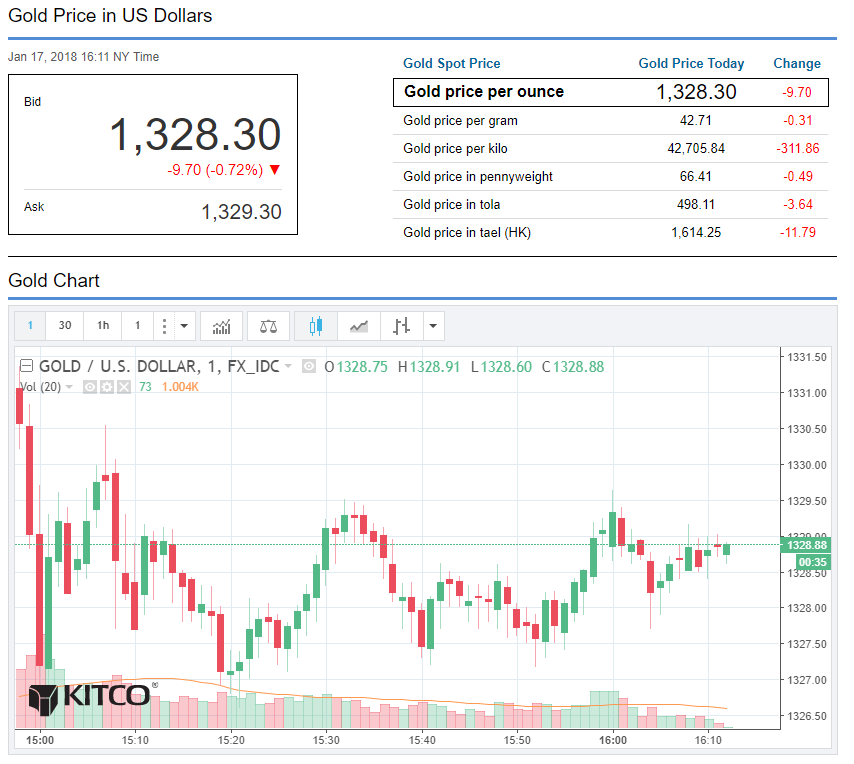 (Kitco News) - Selling pressure in gold picked up late in Wednesday’s trading session as the U.S. dollar found some new momentum and equities see its best day in more than a month.

Within a 30-minute period, more than 2 million ounces were sold, pushing Comex gold futures prices to session lows. However, the market continues to hold critical support levels, according to some analysts.

Equity markets, which have seen consistent gains throughout the session, ending the day at new record highs. The S&P 500 Index settled the day up 26 points to 2,802, up almost 1% on the day.

Gold’s drop does not come as a major surprise to some analysts, who have been expecting to see some consolidation after the yellow metal hit a four-month high at the start of the week.

Along with a stronger U.S. dollar, Streible added that bitcoin could be taking some luster away from gold. While bitcoin has fallen sharply from record highs only one month ago, he noted that the market has held an important retracement level.

Bitcoin is down almost 45% from its record highs seen in mid-December; but, the digital currency has bounced off its lows and has pushed back above $10,000. Kitco.com aggregated charts show bitcoin last traded around $10,800 per token.

“Bitcoin has held the important 50% retracement level so some investors might be selling their gold and buying bitcoin as they see value at these levels,” he said.

Bill Baruch, president of Blue Line Futures, said in a note to clients that a pullback in gold to $1,327 an ounce would be healthy. However, he also added that a close below $1,335 could signal that it is time to take some profits off the table.

Lukman Otunuga, research analyst at FXTM, said that the gold market is showing signs of early exhaustion but the uptrend remains in place if the market can hold support at $1,325 an ounce.