These Factors Will Support Silver Prices In 2018 - Silver Institute

(Kitco News) - While investors can expect to see volatility in silver prices through 2018, the market has plenty of room to move higher due to growing demand and shrinking supply, according to the Silver Institute. 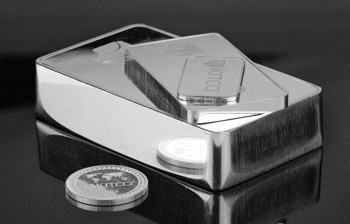 In a report released Thursday, Michael DiRienzo, executive director of the institute said that strong industrial demand, jewelry demand and renewed investor interest will continue to support the market as mine production could decline for the second consecutive year by 2% in 2018.

DiRienzo’s comments come as investors closed the books on what was a dismal year for silver - worst performer in the precious metals space. Last year, the gold/silver ratio rose to a multi-year high.

Kitco.com shows that the ratio remains at an elevated level, trading around 78 points. March silver futures last traded at $16.99 an ounce, down 1% on the day.

Looking at the demand side, DiRienzo said that electrification of the automotive sector and growing solar power demand are two important factors that will boost silver’s industrial demand.

He added that silver demand for photovoltaic cells could hit a record after the sector is estimated to have consumed 92 million ounces of the precious metal in 2017.

“Although silver is used in small quantities in some applications, the diversity is large, and the continued rising volumes of applications are expected to again have a positive impact on silver consumption from industrial products this year,” he said.

Looking at the jewelry market, DiRienzo said that the institute is forecasting demand to rise 4% in 2018, up from a 1% increase seen in 2017.

One of the disappointing sectors in silver last year was physical bullion demand. Last year, the U.S. Mint saw its worst sales of America Eagle silver coins in 10 years.  DiRienzo pointed outthat the silver market suffered last year because of competition from equity markets and cryptocurrencies.

However, he added that the institute expects that investors will return to the bullion space in 2018. “With equity and bonds in “expensive” territory and Bitcoin’s stratospheric increase taking a breather during the beginning of 2018, we expect some investment to flow back into precious metals.”

In the paper market, DiRienzo said that they see demand for silver-backed exchange traded products to rise 3% in 2018, adding to recording holdings of 670 million ounces recorded in 2017.